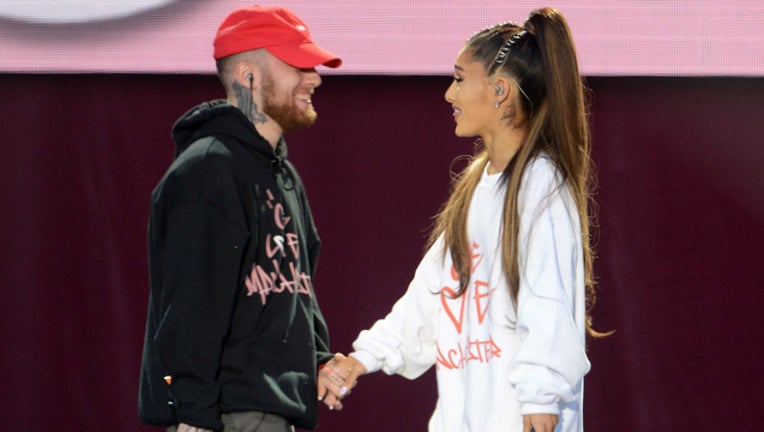 In this handout provided by 'One Love Manchester' benefit concert (L) Mac Miller and Ariana Grande perform on stage on June 4, 2017 in Manchester, England. Donate at www.redcross.org.uk/love (Getty Images/Dave Hogan for One Love Manchester)

(FoxNews.com) - Ariana Grande temporarily disabled comments from her Instagram after trolls blamed her for the death of her ex-boyfriend Mac Miller, a report stated.

Grande, 25, has not publicly commented on Miller’s death after he was found unresponsive in his Studio City, Calif., home. He was pronounced dead on Friday at age 26. An autopsy will be required to determine the cause of death.

Miller and Grande dated for nearly two years before breaking up in May. Grande is engaged to “Saturday Night Live” star Pete Davidson.

The “God Is a Woman” singer temporarily disabled her comments on Instagram after trolls blamed her for the rapper’s death, BuzzFeed reported. As of Saturday morning, the comments were turned back on.

In May, Miller was arrested for driving under the influence and hit-and-run after hitting a utility pole with his 2016 Mercedes-Benz G-Wagon. His blood alcohol was reportedly twice the legal limit. After the crash, a fan blamed Grande for Miller’s arrest. Grande called the claim “absurd.”

“How absurd that you minimize female self-respect and self-worth by saying someone should stay in a toxic relationship because he wrote an album about them, which by the way isn’t the case,” she wrote.

The “No Tears Left to Cry” singer said she was “not a babysitter” and tried to help Miller with his sobriety.

"I have cared for him and tried to support his sobriety and prayed for his balance for years (and always will of course) but shaming / blaming women for a man's inability to keep his shit together is a very major problem," she wrote.

A source told Entertainment Tonight that Grande was “devastated” by the news of Miller’s death.