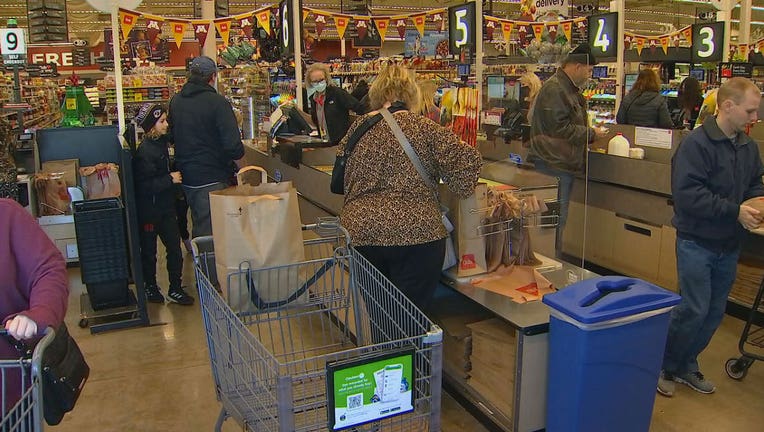 CHANHASSEN, Minn. (FOX 9) - A potential way to gauge the excitement about this Thanksgiving is to count the number of trips people are making to the grocery store in preparation.

"Today would be the second," says one shopper at the Cub Foods store in Chanhassen.

Shoppers pack grocery stores for last-minute shopping ahead of Thanksgiving

A potential way to gauge the excitement about this Thanksgiving is to count the number of trips people are making to the grocery store in preparation.

"Every day for the last three days, twice a day," says another shopper.

"Since Friday this is my fifth time," says Jennifer "I ran out of butter then the bread I had was moldy because I bought it too early."

While we met people who had family gatherings abruptly changed because of covid and quarantine situations we also talked with Shawn and Charlie Thomas.  The father and son duo are skipping the turkey, skipping the out-of-state family gathering, all for the love of hockey, and a game early Friday morning.

"It’s s good to switch it up," says Charlie.

The vast majority of people we talked to at the Cub Foods in Chanhassen are making sure to have every last ingredient for the meal so many missed gathering for last year. And while the cost of the Thanksgiving meal is up about 14% over 2020..those willing to take a few seconds of their holiday rush to talk with us point out it’s the long-overdue togetherness that's priceless.

"It’s more about getting together," says Jennifer "I did offload some of the sides to my family members to let them help this year, but I don’t think it was that bad this year."