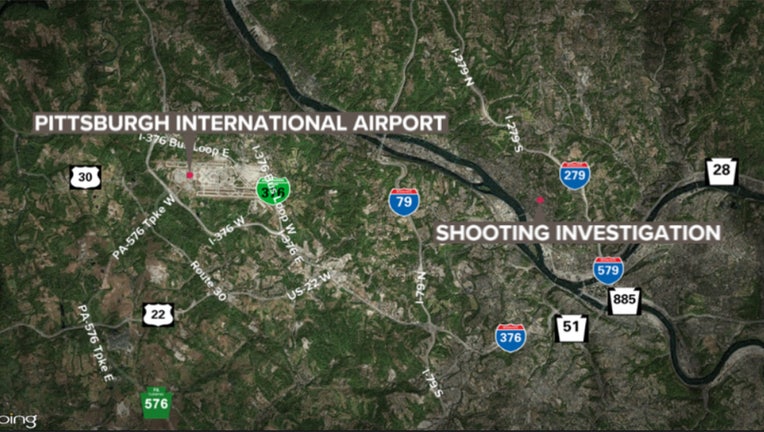 A map showing the location of a shooting outside of a Pittsburgh funeral is seen in this map, Friday, Oct. 28, 2022. (FOX TV Stations)

At least six people were shot after gunfire erupted outside a funeral in the Brighton Heights neighborhood of Pittsburgh Friday, police said.

Pittsburgh Police Commander Richard Ford told reporters one victim was in critical condition and five others were stable after a shooting outside of Destiny of Faith Church at approximately 12:04 p.m.

"At this time, we don't have any information regarding suspects that we are going to release," Ford said at a news conference.

He added there "most likely" is more than one suspect.

Earlier in the afternoon, Pittsburgh Public Safety said there were an unknown number of victims after gunfire erupted in the area of the 3700 block of Brighton Road.

"Despite several media reports, the number of victims in this incident is still unconfirmed. Public Safety will release those details when they’re available," the department tweeted.

A staff member at Destiny of Faith Church told Fox News Digital the shooting happened during a funeral service.

"It was a funeral. It was outside the church. All of our staff are fine," Rev. Nicita Moses said.

According to Action News 4, the funeral service was for John James Hornezes Jr., who was killed in a shooting on Pittsburgh's North Side Oct. 15.

A witness reportedly said someone drove by the church in a vehicle and fired shots.

Police could not confirm it was a drive-by shooting and said the matter is still under investigation.

"I just pray to God, whoever it is, whatever it is, they’re going to repent," said Page Davis, Hornezes' godmother. She was reportedly inside the church when shots rang out.

"They better get on their knees and repent. God’s sitting high, looking low, and everybody will reap what they sow. This is so devastating to the families," she added.

Another witness told Channel 11 News the shooting was "senseless."