Timeline of major events during the 9/11 terror attacks

On September 11, 2001, thousands of Americans perished after terrorists hijacked four planes and turned them into guided missiles.

NEW YORK - On September 11, 2001, a total of 19 terrorists hijacked four airplanes, crashing two of them into the World Trade Center, one into the Pentagon and the fourth into a Pennsylvania field, killing thousands of Americans in the process and wreaking destruction that, in its aftermath, has continued to claim lives.

More than 2,600 people perished at the World Trade Center, 125 people died at the Pentagon and 256 people died on four airplanes on that fateful day alone.

Those who managed to survive the attacks recounted harrowing tales of what it was like to endure the onslaught of terror and destruction that day, and many of them marveled at how close they came to death.

“Those of us who were on Capitol Hill Tuesday morning believe that we probably owe our lives to the passengers on the plane that crashed in Pennsylvania while en route to D.C.,” Judith A. Gray wrote in a narrative of her experience for the Library of Congress.

Vietnam veteran Nicholas Maiorca was working in the Pentagon when American Airlines Flight 77 crashed into the western face of the building in Arlington, Virginia. In a recorded interview with LOC, Maiorca recounted how the impact of the plane shook the building so hard and created so much noise that he had flashbacks to serving in Vietnam.

Maiorca helped secure the crime scene that day and described the carnage he saw as he worked, “I came across one left shoulder of a human body. And then there was a, I also found a left foot, there was no shoe on it or a sock, it was just a bare foot... So it immediately took me back to my Vietnam days.”

In a separate narrative given to LOC, a man named Owen Burdick detailed what it was like to watch the World Trade Center attacks from just a few blocks away at Trinity Church, where he worked.

"A verger, David Wright, and I heard a horrendous noise and ran to the back door of the church to see what was happening. With a clear view of the South Tower, we watched as the building began to collapse. David screamed ‘Oh, my God!’ and it marked the first time I was truly afraid. It really looked as if, from three blocks away—only two football fields—we were going to be consumed. The sound of the crushing metal, the thousands of splintering panes of glass, the deafening explosion, people falling or jumping from the building as it crumbled—it was a maelstrom, and I don't think I've ever used that word before in my life. I just keep seeing it and hearing it over and over." 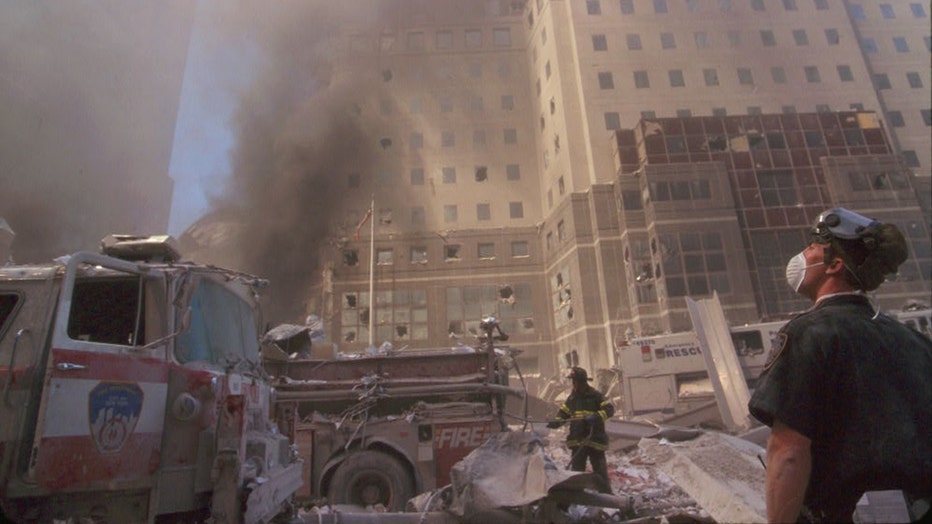 A first responder looks up during rescue efforts during the 9/11 terror attacks on the Twin Towers. Photograph is from 8 rolls of unedited film taken by an anonymous photojournalist at ground zero that day. (Library of Congress, Prints & Photographs)

Many people left personal memorials at the site of the attacks in the days that followed to honor the lives of loved ones lost.

A man named Michael left a pair of work shoes in a shoe box on top of the rubble in the days following the attack, and in Sharpie, scribbled across the underside of the box was a message which read, “Mark 9:2, v 3. His clothes became shining, exceedingly white, like snow such as no launderer on Earth can whiten them... I looked for you my union brother. I looked for you my baby brother! love you Matthew Diaz!: your brother Michael!“

It was one of countless tributes left behind at the site of the Twin Towers.

Makeshift memorials also popped up outside the Pentagon in the days that followed the attacks as people left flags, poems and flowers.

Nearly two years after the attacks, a memorial and museum now stands where the Twin Towers fell.

Completed in 2014, the 9/11 Memorial & Museum was dedicated on May 15 and opened to the public on May 21. At the center are two square reflecting pools, which mark where the Twin Towers once stood. Several large pieces of steel from the World Trade Center which remained after the attacks were built into the structure of the memorial.

The names of every person who died in the attacks on September 11, 2001, are inscribed in bronze at the 9/11 Memorial exhibition, called In Memoriam. Those nearly 3,000 names can be read here.