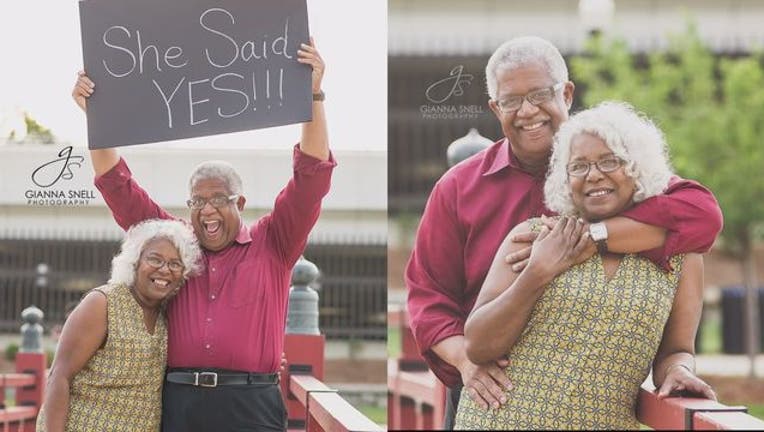 HUNTSVILLE, Al. - An older couple's engagement photos has gone viral for showing the internet that it's never too late to find love.

The happy couple's picture was photographed by Gianna Snell and has been making it's rounds around the web.

According to Snell's blog post, she spotted Cleveland "Murphy" Wilson and Lucinda Meyers on a park bench at an outdoor concert. There were hundreds of people present but all she could hear was the couple's laughter.

She approached the couple to ask if she could photograph them, a little apprehensive at first, the lovebirds consented.

She wrote, "The pair couldn't keep their hands off of each other. They later shared that it was this gesture, his hand around her waist, several months earlier that was one of the first signs of a beautiful spark between them."

The two had met at church but for three years occupied the same space without having any interaction.

You see, Murphy was no stranger to love. He'd previously been happily married for 41 years but in 2013 his wife passed away.

Snell wrote that Murphy never lost hope in finding love. In fact, when people would ask him if he'd ever remarry he'd respond, "God picked her the first time I married, He's going to have to do it again."

And with that, he made up his mind to refrain form talking to anyone at church because he wanted God to do the choosing.

In 2013, looking to start fresh, Lucinda Meyers moved from Boston to Huntsville, Alabama. She too was previously married but hers ended in divorce-- she had been single for 30 years.

"She had been praying and waiting for God to send her a husband," wrote Snell.

And one day, the stars aligned because Murphy took notice of Lucinda-- her smile was enchanting.

He puckered up the courage to approach her and ever since their encounter they've been inseparable. On July 29, 2017 the pair will exchange their vows.

Snell also noted in her blog that Murphy's daughters, Gina Wilson and Danita Jones, are the wedding planners and all the couple has to do is show up.

Love is patient. These two are the product of that.

Congratulations to Murphy and Lucinda!