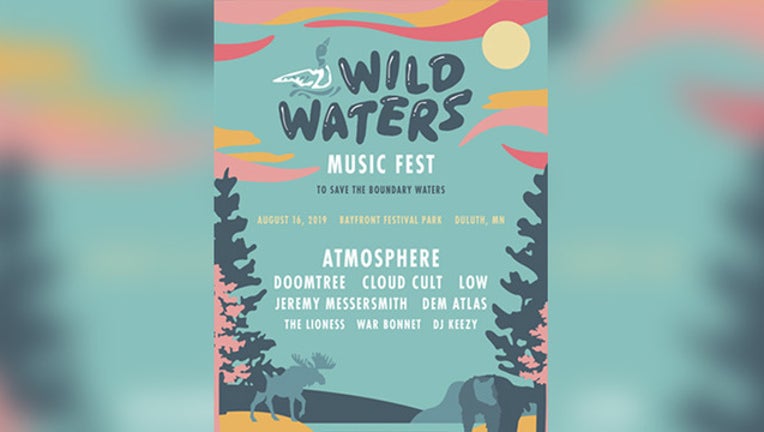 (Save the Boundary Waters)

ELY, Minn. (FOX 9) - The Campaign to Save the Boundary Waters is bringing in some of Minnesota’s top musical acts help amplify its message.

The one-day festival will take place Friday, Aug. 16 in Bayfront Festival Park in Duluth. The acts will start at 3:30 p.m.

A portion of the proceeds and all donations will go toward Northeastern Minnesotans for Wilderness, which is leading the fight save the Boundary Waters from proposed sulfide-ore copper mining.

Tickets are $33 and go on sale Friday, June 14 at noon. You can find them on Ticketmaster.

“Like the Boundary Waters, Minnesota’s rich music scene is cherished here at home and recognized far and wide. It’s awesome to see so many great Minnesota musicians uniting in support of our mission to save this pristine wilderness and shared treasure,” said Tom Landwehr, Executive Director of the Campaign to Save the Boundary Waters.

Musicians from Doomtree, Cloud Cult and War Bonnet all gave statements of support for the festival Tuesday as well:

"Doomtree is really excited to be a part of the first-ever Wild Waters Music Fest and stand side-by-side with so many awesome musicians, activists, and the Campaign to Save the Boundary Waters. This show is going to rule,” said Lazerbeak.

"I’ve never had my mind blown like my first trip to the Boundary Waters. It’s so easy to forget about how wild and beautiful and open the wilderness can be. It’s even easier to forget how wild and open it can make you feel,” said P.O.S.

“For me, there's just no place that has had such a profound impact on my understanding of myself and our true role in this world . . . It's just you, a backpack, a canoe and a reminder that nature really is the absolute rule-maker, and the more we step on her now, the harder she's gonna bite back,” said Craig Minowa, the frontman for Cloud Cult.

“The Boundary Waters is a sacred place to our ancestors who lived there thousands of years ago. It now lies within our Treaty Territory where we are entitled to hunt, fish, and gather. War Bonnet is proud to make a stand in helping protect the Boundary Waters,” said War Bonnet.