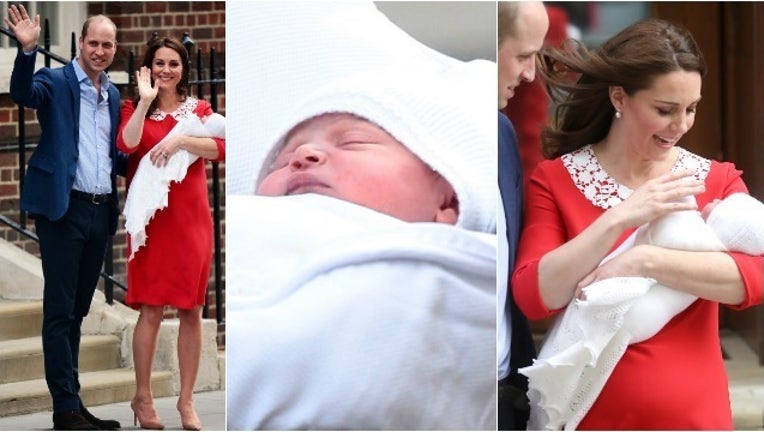 The Duke and Duchess of Cambridge have named their newborn son Louis Arthur Charles.

"The baby will be known as His Royal Highness Prince Louis of Cambridge," Kensington Palace announced on Twitter early Friday morning.

Mixing tradition and modernity, the news of the newest prince was announced by the palace on Twitter and also proclaimed in the forecourt of Buckingham Palace through a framed notice perched on a golden easel.

Tony Appleton, a town crier from southeast England, showed up in full regalia to declare the newborn prince's birth outside the hospital. The words "It's a boy" flashed in lights around the top of London's BT Tower, which can be seen for miles around.

The baby is a younger brother to 4-year-old Prince George and Princess Charlotte, who turns 3 next week. Both were born at the same hospital, as were William and his younger brother, Prince Harry.

The new arrival is Queen Elizabeth II's sixth great-grandchild and bumps Prince Harry to sixth place in the line of succession. The baby is fifth in line, after grandfather Prince Charles, father Prince William, and his two siblings.

Charlotte is the first royal daughter to stay ahead of a younger brother in the line of succession. Before the rules were changed in 2012, male heirs took precedence.

Louis' birth was overseen by a team of doctors including consultant obstetrician Guy Thorpe-Beeston and consultant gynecologist Alan Farthing - who were also called in for the births of George and Charlotte - as well as the hospital's midwives.