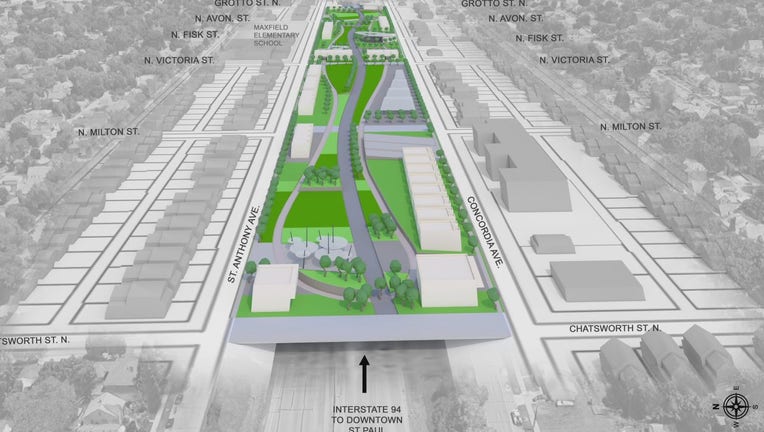 A proposed land bridge for the Rondo neighborhood in St. Paul.

Initially thought of as a moonshot, the federal infrastructure proposal’s targeting of historic racial inequities is bringing the bridge slightly closer to becoming a reality.

For the last four years, Reconnect Rondo has been hoping to heal a community torn apart by the construction of I-94. Now, they hope their efforts could be put in the fast lane.

"We couldn’t have dreamed for a better opportunity," said Reconnect Rondo Executive Director Keith Baker. "We think it’s like a glove that fits so wonderfully around our project."

If you’ve ever&nbsp;driven on I-94 through St. Paul, you traveled through an ugly chapter in the city’s history.

Biden’s American Jobs Plan includes $20 billion for a new program to reconnect urban neighborhoods cut off by highway projects in the past.

That’s exactly why Reconnect Rondo wants to do by building a land bridge several blocks long over a portion of I-94 near downtown St. Paul with housing, greenspace and a marketplace that would re-link both sides of the mostly Black Rondo neighborhood that was cut in half by the freeway in the 1960s.

So far, supporters of the land bridge have asked state lawmakers for $6.2 million to come up with a master plan.

In all, the project is expected to cost a total of $555 million, but if the president’s infrastructure proposal is passed, federal funding could pick up most of the tab.

"I’m absolutely thrilled," Baker added. "I think this project will be a national model and it will be viewed that way."

Rondo never recovered; it lost 700 homes, 300 Black-owned businesses and 61 percent of its population.

"We’re all in the dark room looking for the light switch if you will, that this is going to make its way, but we feel good about our chances," he said.

The land bridge proposal has had a couple of committee hearings in the House and they hope to have the same in the Senate.

Reconnect Rondo is planning to have a series of informational meetings to get public input on the land bridge in the next few months.