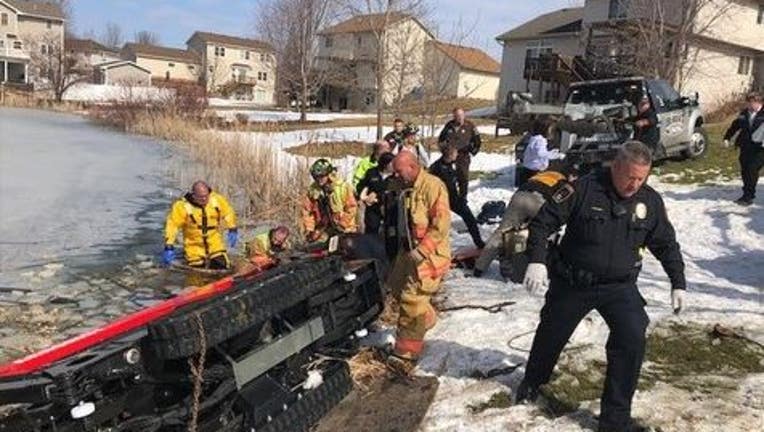 Two people who were trimming trees at a home in Rogers, Minnesota when the lift they were operating overturned in a partially frozen pond, trapping them underneath. (FOX 9)

ROGERS, Minn. (FOX 9) - The owners of a tree-trimming business in Rogers, Minnesota are facing charges for an alleged insurance fraud scheme discovered after one of their employees was injured in an accident last year.

The owners of a tree-trimming business in Rogers, Minnesota are facing charges for an alleged insurance fraud scheme discovered after one of their employees was injured in an accident last year.&nbsp;

According to the charges, on the morning of March 21, 2018, Jerry and his employee, Will Hamer, were trimming trees at a home in Rogers. Jerry was using a remote control to maneuver a lift near the icy embankment in the backyard when he lost control of the lift and it slid down the hill, taking the two men with it.

The lift overturned in a partially frozen pond, trapping Jerry and Hamer underneath.

Jerry was able to free himself, but Hamer remained trapped. The water was up to his nostrils. When emergency crews arrived, first responders held Hamer’s head out of the water while others worked to free him.

Emergency crews extracted Hamer after 30 minutes in the frigid water. He suffered a hyperextended neck and required multiple surgeries for his pelvis, arm and shoulder. He also suffered anxiety and post-traumatic stress from the accident.

A New Hope man, who was trapped under heavy machinery and submerged underwater for nearly an hour, is expressing his gratitude&nbsp;to the rescuers who saved his life.

Hamer later told police about the Gould’s employment and record-keeping practices, which prompted the Minnesota Commerce Fraud Bureau to open an investigation into possible workers’ compensation fraud by the company.

During their investigation, agents from the Minnesota Commerce Fraud Bureau discovered the Goulds were intentionally underreporting their payroll costs to the company that provided them workers’ compensation insurance through the state’s Assigned Risk Plan in order to drive down their premiums.

The investigation also found that when Lorraine sent the insurance company a “First Report of Injury” form about the accident, she intentionally lied about Hamer’s wages, hours worked and status, claiming he was part-time when he was actually a full-time employee.

“I still have nightmares everyday… everyday,” said Will Hamer.

Physically Will Hamer is doing better, but still can't work and occasionally still needs his walker or wheelchair following the tree trimming accident that nearly killed him back in March of 2018 in Rodgers.

“When the accident happened he turned his back and went the other way,” says Hamer.

According to the charges, the Gould's misrepresented payroll information for employees when filing the 2017 taxes. Then the accident happened, and Hennepin County prosecutors believe the Gould’s attempted to correct their books before they got caught. That's also around the time Hamer's boss sent him this check which didn't make sense.

Hamer has made sure to save every single timecard through decades of making a living doing manual labor.

“You trust your boss to do the correct actions,” says Angela Fairbanks, Hamer’s longtime partner. “When something like this happens to expect everything to just be there, and when it’s not it feels like you are freefalling.”

Between multiple surgeries for the injuries to his pelvis, shoulder, clavicle, and back. Hamer and Fairbanks have been fighting to support their family of five. They've gone from Hamer making $900 dollars every week,  part paid in cash part by paycheck, to battles over workman’s comp and now living off $347 every two weeks.

Meanwhile they worry Jerry Gould continues to be a danger to others as his tree trimming work continues.

“I had a problem with him smoking marijuana on the job. that’s what we got into an argument about. I was going to quit the job,” says Hamer. “ We were cutting down trees on these wealthy people’s houses. These people don’t know this individual is high on the job. I’m in sobriety. He’s jeopardizing my sobriety. I have 15 years of sobriety.”

The new charges and ten thousand dollars’ worth of fines from OSHA don't include anything about drug use Hamer witnessed, but now they are looking forward to facing the Gould's in court.

“I just hope he learns from this mistake,” says Hamer “You know you are putting people’s lives in danger.. this is serious.”

Jerry and Lorraine were charged by summons with one count each of insurance fraud and theft by swindle. They will make their first court appearance on Jan. 3.