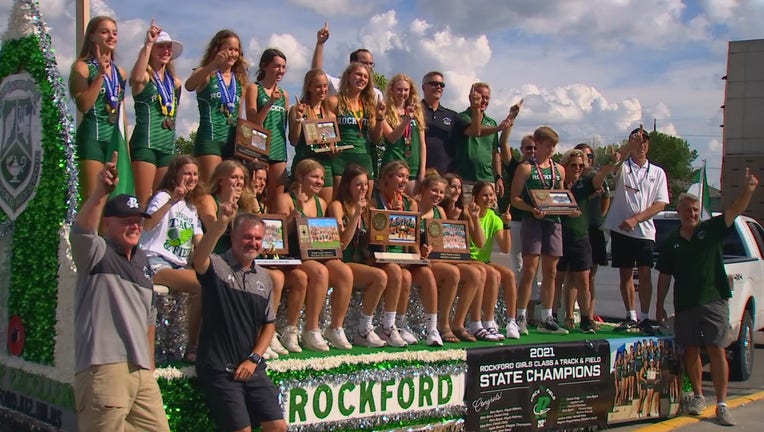 ROCKFORD, Minn. (FOX 9) - People lined the streets of Rockford on Sunday, to mark a historic achievement from the school’s athletic program.

"[It’s] been about 8 [to] 9 years in the working," track and field head coach Chad Robran said. "The community has been thirsting for a state title."

The Rockford High School girls' track and field team just came up big at the state meet, and in return, the town threw a parade.

"They won it, but truly in my heart we won it," Robran told parents gathered outside of the school. "We won it as a family."

The first place finish is especially sweet, because it’s the school’s first athletic state title in 165 years of competition.

"You will always be able to say you were the first team in our history to win a state title," superintendent Rhonda Dean said. "Congratulations!"

"It’s significant, and it opens up the door," Robran said. "It shows to the community, to the athletes, and to other programs that it can be done."

Just under 10 years ago, the Rockford track program was actually without a running track altogether after their old facility was condemned.

"Ten years ago we couldn’t even have a track meet up there," athletic director Daniel Pratt said. "This community came together and we built a beautiful facility."

A new stadium was built, thanks to a local referendum, and that new facility helped build the program, Coach Robran says by bringing out more athletes for the team.

"Momentum and energy has kind of been carrying off of that new facility," Robran said. "Year after year, we won more [meet] championships, more athletes came out."

The program has grown from 45 to 120 athletes, but amid a pandemic they faced even more hurdles.

"When we had quarantine, when we had other schools canceling on us," Dean explained.

Ultimately, their championship season was also an undefeated season.

"The next step is for the boys. I want to bring a boys’ state title back into Rockford," Robran finished. "So we’re just getting started."