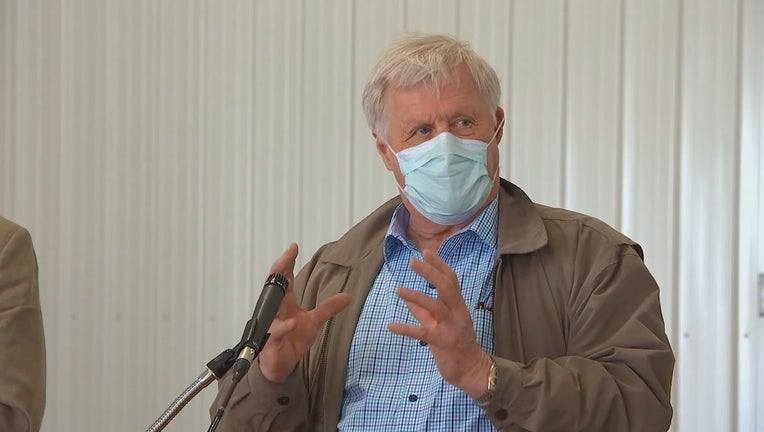 (FOX 9) - Republicans view U.S. Rep. Collin Peterson's seat in western Minnesota as one of their best pickup opportunities nationwide, but their candidates have waged a bitter battle against each other ahead of Tuesday's primary.

Michelle Fischbach, the former lieutenant governor and longtime state senator, is the GOP's endorsed candidate. She has been unable to break free from the primary field, and faces accusations from a rival that she's too much of a political insider.

Republicans view U.S. Rep. Collin Peterson's seat in western Minnesota as one of their best pickup opportunities nationwide, but their candidates have waged a bitter battle against each other ahead of Tuesday's primary.

President Donald Trump won the 7th Congressional District by 31 points in 2016, and Peterson has survived two close elections in a row. But Fischbach's inability to shake off her GOP challengers is making the party's task more difficult, University of Minnesota political science professor Larry Jacobs said.

Fischbach and two other candidates, two-time Peterson challenger Dave Hughes and medical doctor Noel Collis, faced each other in a virtual debate at this week's Farmfest. Peterson also participated.

The candidates were in near lockstep on most of their policy positions throughout the forum, which centered on agriculture, environmental and rural issues.  Hughes, who lost to Peterson by 4 points in 2018 and 5 points in 2016, waited until his closing statement to make his case against Fischbach.

Fischbach had already given her closing statement, so she was unable to respond.

Earlier, the candidates were asked how they would help bridge a divided country in Congress. Fischbach redirected her comments into a critique of Gov. Tim Walz's emergency powers over the coronavirus.

"Gov. Walz has been putting this one-size-fits-all 'One Minnesota' plan in place as we’ve dealt with the COVID, and it is obviously not working," she said.

Hughes was pessimistic that members of Congress could do anything to help the national discourse.

"I’m not sure that 535 members of Congress in Washington dc can do a single darn thing about the growing division in the United States," he said. "I’m not sure what a bunch of legislators who spend most of their time trying to get re-elected, what on earth are they going to do to help a nation of 330 million people?"

The third GOP candidate, Collis, said the federal government should give more power to the states.

"We must do everything we can to try to achieve that, and that means giving power back to the people from Washington," he said.

As he waits for the Republican primary winner, Peterson is promoting his work as House Agriculture committee chairman and his reputation as one of the most conservative Democrats in Congress. He is consistently ranked among the most bipartisan members of Congress, based on bills introduced with lawmakers of the other party.

"I’m proud to have the most bipartisan record in Congress of either party, and I will continue to do that in the future if I’m honored to be elected one more time in the 7th district," he said.