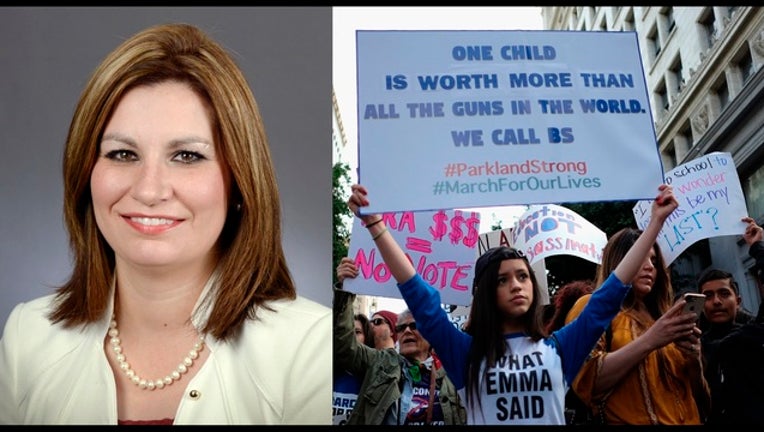 Rep. Mary Franson, left, and a student protester from Saturday's "March for our Lives" in Washington, D.C. (right). Photo via Getty Images.

(KMSP) - Minnesota Rep. Mary Franson apologized Wednesday for comments made on Facebook over the weekend that seemed to compare the "March for our Lives" student protesters to Hitler Youth, though she still denies any intention to draw a parallel between the two groups.

The series of posts drew widespread condemnation from around Minnesota--and around the country--with Franson deleting her social media accounts after the incident. She appears to have reactivated her Facebook account Wednesday to make the apology, saying in part, "I know there is no comparison between the Hitler Youth and the American students who marched in Washington or come here to our State Capitol."

Franson initially shared a post from another page referring to Parkland shooting survivor David Hogg as "Supreme Leader Hogg," claiming he made a statement saying his constitutional rights were infringed upon. Above the article, Franson wrote, "he's the leader of the movement though" with a raised eyebrow emoji. 20 minutes later she penned another post, saying "There you have it friends ... the anti gunners, the high school students who speak for all, aren't interested in an inch". [sic] They want the mile. They want your guns. Gone."

"Because of the timing of my posts, I now understand why it appears that I was making a comparison," she said in the Facebook apology. "I am terribly sorry that because of my carelessness and insensitivity, I left that impression and in so doing risked minimizing the horrors of the Holocaust. I apologize to anyone who was hurt by my thoughtlessness."

This is not the lawmaker's first brush with controversy after making another Holocaust-related reference to gun control measures in 2016, as well as an online comment in 2012 comparing food stamp recipients to animals. She's also garnered attention in the past for pushing the widely-debunked theory that vaccines can cause autism.

Franson says, however, that she "greatly values" the First Amendment freedom to gather peacefully and petition the government and hopes to regain the trust of her colleagues and constituents.

"Moving forward, I am committed to earning the respect of my colleagues and constituents by being more careful with what I post on social media, including with regard to the Holocaust," she wrote. "Remembering the Holocaust and honoring its victims, survivors, and their descendants is too important and not something I want to ever risk harming because of carelessness or insensitivity on my part."