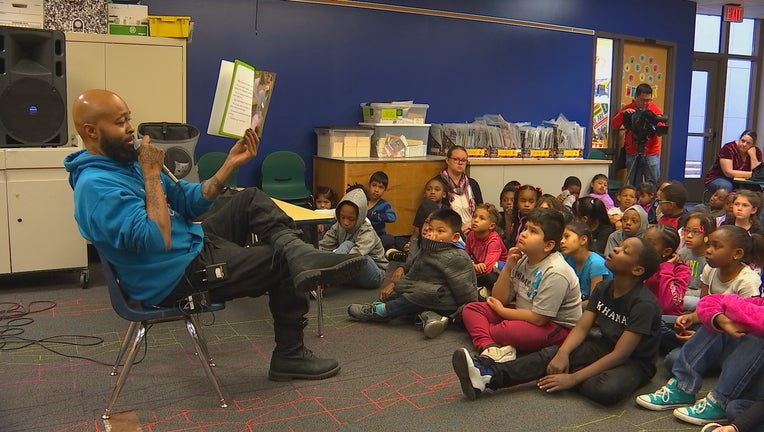 (FOX 9) - A few years ago, an up-and-coming rapper out of Atlanta put down his mic to focus on a career rescuing cats.

Sterling Davis, founder of Trapking Humane Solutions, now shares his love for animals with students across the country, focusing on communities of color. On Tuesday, he made a stop in Brooklyn Center.

A few years ago, an up-and-coming rapper out of Atlanta put down his mic to focus on a career rescuing cats.

Standing before a group of students at Earle Brown Elementary, Davis has a way with words. But, he wasn’t there to talk music.

“What I do is catch the cats. I get them spayed, neutered and vaccinated,” he said.

A once emerging rapper, Davis now runs a nonprofit rescuing stray cats. To help reduce the cat population, the animals are trapped, neutered and released.

Known as the “Trap King,” Davis, and his cat Damita Jo travel across the country on a mission to break stereotypes and engage communities of color.

“I think that I can be that bridge, to bridge that gap between rescue and the black community,” he said.

“We have a whole cadre of volunteers that are just as excited as Sterling is about cats, and it’s just unbelievable to see them and all of their passion for it,” said Phil Manz with Feline Rescue.

Davis, an animal advocate and influencer, is making a difference one cat at a time, without missing a beat.

“Each time that I feel like I’m saving a cat, I think that it’s kind of saving me and getting back some of what I lost as a child,” he said.

Feline Rescue will host the Alley Cat Bash fundraising event this Saturday at Macalester College, where Sterling Davis will serve as the guest speaker.