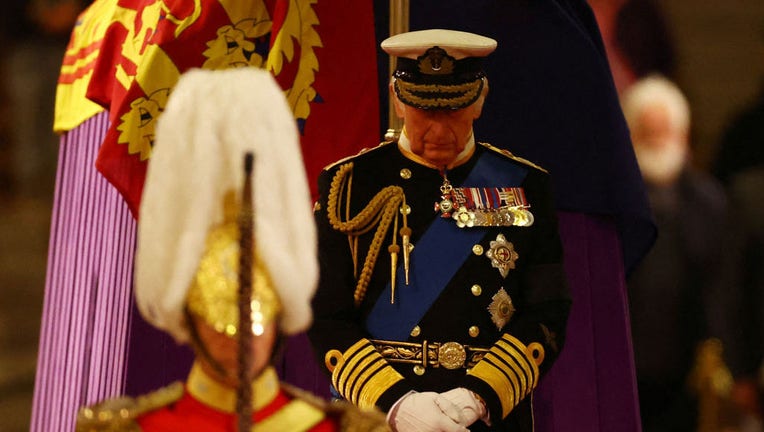 Britain's King Charles III stands guards as he takes part in a vigil around the coffin of Queen Elizabeth II, draped in the Royal Standard with the Imperial State Crown and the Sovereign's orb and sceptre, lying in state on the catafalque in Westmins

LONDON - A surging tide of people — ranging from London retirees to former England soccer captain David Beckham — have lined up to file past Queen Elizabeth II's coffin as it lies in state at Parliament, so many that authorities had to call a temporary halt Friday to more people joining the miles-long queue.

By late afternoon, a live tracker said the line to get into historic Westminster Hall had reopened, but the British government warned that it would take more than 24 hours of waiting to cover the 5 miles (8 kilometers) from the start of the line in Southwark Park to the coffin at Parliament. The government also warned that "overnight temperatures will be cold."

The mourners kept silently streaming into Westminster Hall even as King Charles III and his three siblings stood vigil around the flag-draped coffin for 15 minutes on Friday evening. A baby's cry was the only sound.

Those who came often bowed before the coffin or made a sign of the cross. Several veterans, their medals shining in the spotlights, offered sharp salutes. Some people wept. Many hugged one another as they stepped away, proud to have spent hours in line to offer a tribute, even if it lasted only a few moments.

Beckham was spotted in the line of mourners near Britain’s Houses of Parliament at lunchtime Friday. He's believed to have joined the queue at 2 a.m. and to have lined up for more than 10 hours. Wearing a white shirt and black tie, he bowed briefly to the coffin before moving out of Westminster Hall.

"We have been lucky as a nation to have had someone who has led us the way her majesty has led us, for the amount of time, with kindness, with caring and always reassurance," Beckham said. "I think that’s the one thing that we all felt safe and we will continue that with the royal family. But I think her majesty was someone special and will be missed, not just by everyone in our country but everyone around the world."

Helena Larsen, 76, arrived just too late at the park to get into the line.

"We have literally got here and they have shut it in front of us," she said, adding that she would likely hang around until the gates were reopened.

"You’re in Westminster Hall in her presence, with a crown on top of her coffin, and it’s incredibly emotional," he told The Associated Press. 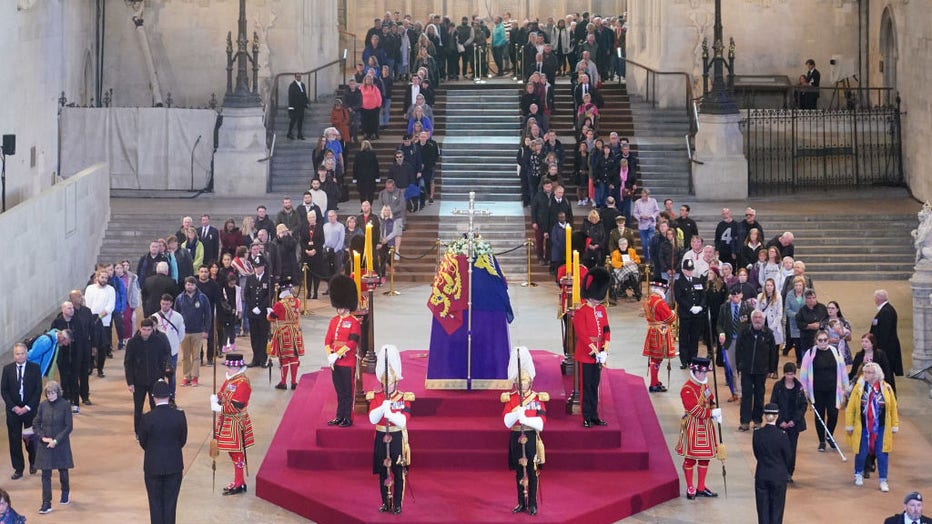 Members of the public file past the coffin of Queen Elizabeth II, draped in the Royal Standard with the Imperial State Crown and the Sovereign's orb and sceptre, lying in state on the catafalque in Westminster Hall, at the Palace of Westminster, ahea

Meanwhile, a delegation of Chinese officials reportedly was barred from visiting the historic hall in the Houses of Parliament where the late queen's coffin is lying, as geopolitics cast a shadow over the solemn pageantry.

The Chinese ambassador to the U.K. has been banned from Parliament for a year after Beijing sanctioned seven British legislators last year for speaking out against China’s treatment of its Uyghur minority in the far-west Xinjiang region.

The offices of Prime Minister Liz Truss and of House of Commons Speaker Lindsay Hoyle declined to comment Friday on a report by news outlet Politico saying the Chinese delegation would not be allowed into Westminster Hall.

In Beijing, Chinese Foreign Ministry spokesperson Mao Ning said she had not seen the Politico report but that as host of the queen's funeral, the U.K. government should "follow the diplomatic protocols and proper manners to receive guests."

A Chinese delegation is expected to attend the queen's Monday funeral, which is in Westminster Abbey and not Parliament. Organizers of the funeral have not published a guest list.

After a day out of the public eye, King Charles III flew to Wales on Friday on the final leg of his tour of the four nations that make up the United Kingdom.

Charles, who for decades before his accession to the throne was the Prince of Wales, visited Llandaff Cathedral in Cardiff for a prayer service in honor of his late mother. After it, he and Camilla, the Queen Consort, greeted crowds of wellwishers, including flag-waving schoolchildren, as people chanted "God save the king!"

A small group protested his visit, with one person holding up a banner saying: "King? No thanks."

The king later traveled to the Welsh parliament, the Senedd, to receive condolences from legislators. He told them that Wales "could not have been closer to my mother’s heart."

Charles said he felt "immense gratitude for the privilege" of serving for decades as Prince of Wales, the title traditionally bestowed on the heir to the throne. His eldest son Prince William now has that title.

Charles returned to London to stand vigil at his mother’s coffin in the evening with his three siblings, Princess Anne, Prince Andrew and Prince Edward.

Before the vigil, Edward said the royal family had been "overwhelmed by the tide of emotion that has engulfed us and the sheer number of people who have gone out of their way to express their own love, admiration and respect (for) our dear mama."

On Saturday, all eight of Queen Elizabeth II’s grandchildren are expected to stand vigil beside her coffin.

William, who after his grandmother's death is now the heir to the throne, will stand at the head of the coffin and Harry at the foot. Both princes, who are military veterans, will be in uniform.

Most senior royals hold honorary military roles and have worn uniforms to commemorate the queen. Harry, who served in Afghanistan as a British army officer, wore civilian clothes during the procession of the queen's coffin from Buckingham Palace because he is no longer a working member of the royal family. He and his wife Meghan quit royal duties and moved to the United States in 2020.

The king, however, has requested that both William and Harry wear their military uniforms at the Westminster Hall vigil.

London police said the queen's state funeral on Monday will be the largest single policing event the force has ever handled, surpassing even the 2012 Summer Olympics and the queen's Platinum Jubilee in June celebrating her 70 years on the throne.

"The range of officers, police staff and all those supporting the operation is truly immense," said Metropolitan Police Deputy Assistant Commissioner Stuart Cundyhe.

Renata Brio and Jeffrey Schaeffer in London contributed. Editor's note: Pool video has since been removed from this story due to usage restrictions from the royal family.