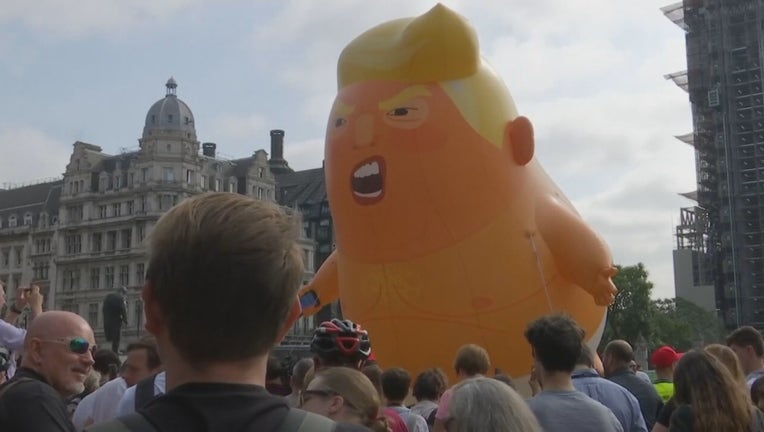 PORTOLA VALLEY, Calif. - President Donald Trump is making a rare visit to California, a Democratic stronghold where he is expected to rake in millions of dollars during a series of fundraisers for his reelection effort that are almost certain to be met with jeering protests.

Already, on Tuesday morning, protesters were geared up to fly a baby Trump balloon, showing the president in diapers, on Alpine Road in Portola Valley, where they believe the motorcade will appear. It's unknown exactly where he is holding his fundraising luncheon, but KTVU  has confirmed that Palo Alto and Mountain View police were notified of his visit.

When he touches down at Moffett Field about 11 a.m . PST, it will be his first trip to the Bay Area as president. The last time he was here was in 2016 in San Jose when he was campaigning. That visit was marred by violence and protests between the left and the right.

Trump has routinely mocked California over its liberal culture, policies and politics. His visit this week signals that despite the state's decidedly leftward swing in recent years there are still plenty of wealthy Republicans who support him.

"There's not been a president in living history that is as unpopular in the state of California as Trump," said Mike Madrid, a GOP political consultant who is an outspoken Trump critic. "But our money spends the same as everyone else's."

Trump continues to rake in gobs of cash more than a year out from the November 2020 contest, with his campaign and the Republican National Committee pulling in more than $210 million since the start of 2019, Federal Election Commission records show. That's more than all the current Democrats seeking to replace him raised combined during that period.

The California events, which will be spread across two days in the Bay Area, Los Angeles and San Diego, are expected to bring in an additional $15 million, according to a Republican official familiar with the plans who spoke on the condition of anonymity to discuss internal matters.

California was an incubator for the modern conservative movement that swept the state's former Gov. Ronald Reagan into the White House in 1980. But demographic changes and an influx of new residents have helped drastically rework the political contours of the country's most populated state, with the former GOP stronghold of Orange County now home to more registered Democrats than Republicans. For Republicans, who have been resigned to political irrelevance at the state level, a donation to Trump can amount to its own form of protest.

"By showing up to a fundraiser deep in the belly of the beast, one is saying: 'I don't care what the liberal politicians are saying and I want to show my support for him publicly,'" said California's Republican National Committeewoman Harmeet Dhillon, who is an ardent Trump supporter. She added: "I sold $100,000 worth of (tickets), and I could have sold another $100,000 more."

California has long been a key fundraising hotbed for politicians of both parties, which have relied on the entertainment industry and wealthy industry heads to finance their political ambitions. But under Trump, the run-of-the-mill fundraising trip has taken on a complicating dimension due to his harsh criticism of everything from the state's immigration laws to its forest management practices, which he blamed for fatal wildfires.

Earlier this month Trump lashed out at "Will and Grace" TV star Debra Messing after she tweeted that attendees of the Trump's California fundraisers should be outed publicly.

"I have not forgotten that when it was announced that I was going to do The Apprentice, and when it then became a big hit, helping NBC's failed lineup greatly, @DebraMessing came up to me at an Upfront & profusely thanked me, even calling me "Sir." How times have changed!" Trump tweeted.

In August, he took aim at the state's massive film industry, calling Hollywood "very dangerous for our country."

Trump has also complained about the extent of homelessness in California. Housing and Urban Development Secretary Ben Carson is expected to follow Trump to California, if one day behind him, on visits to San Francisco, Los Angeles and San Diego. A senior HUD official said Carson will speak on a range of issues, including increasing the supply of affordable housing and incentivizing investment in distressed communities while protecting vulnerable neighbors.

Already, the Backbone Campaign, a Washington state-based progressive group, said on Facebook that it planned to fly a large "Baby Trump" balloon in the Bay Area when Trump is scheduled to be there on Tuesday.

In an unusual move, Trump campaign officials - not his top donors - have been listed as sponsors of the event.

Dhillon said there were concerns that Antifa, an anti-fascist group, could stir violent protests.

"For every person coming to this event, there would probably be 10 more," she said.

Trump began his three-day trip to the West at a rally in New Mexico, which he hopes to win next year despite losing by about 8 percentage points in 2016.

Trump referred to California a couple of times in his speech, and not in a good way.

The president noted that his administration is at odds with the state over fuel efficiency standards for automobiles. He long has made clear he wants to end California's clout in setting mileage standards, and Monday night he said he wants heavier cars because they're safer and cheaper, even if they are less fuel efficient.

"California wants you to do the other cars and we don't," Trump said. "We will end up in big litigation and I am fighting for you," he told the crowd.

He also joked about moving part of the border wall in San Diego to where it would be more appreciated.

"I would love to take that sucker down and move it right now to New Mexico," he said to rousing cheers.
___