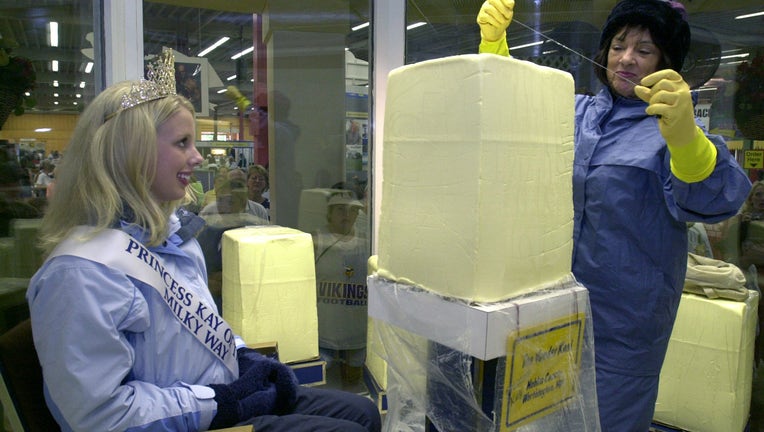 Falcon Heights, Mn., Thurs., Aug. 21, 2003--(Left to right) Eighteen-year-old Tae Vander Kool of Worthington, the new Princess Kay of the Milky Way, sits in a refrigerated booth on a turntable while her head to be carved in butter by Linda Christense (JOEY MCLEISTER/Star Tribune via Getty Images / Getty Images)

(FOX 9) - While the Minnesota State Fair has been canceled for 2020 due to the COVID-19 pandemic, the long-standing tradition of butter sculpting will still go on this summer.

On Aug. 13, the newly crowned Princess Kay of the Milky Way will have her likeness sculpted in butter, the organization said in a Facebook post. The nine other finalists will be sculpted as well, one per day until Aug. 22.

The butter sculpting will be streamed live on Facebook for the public to watch since they cannot view it in person this year.

Christensen is expected to return next year for her 50th year of carving Princess Kay, after which Kulzer will take over the annual tradition.

The 67th Princess Kay of the Milky Way will be crowned on Aug. 12 at a private banquet for the 10 candidates and their families. The coronation ceremony will also be streamed live on the Princess Kay Facebook page.