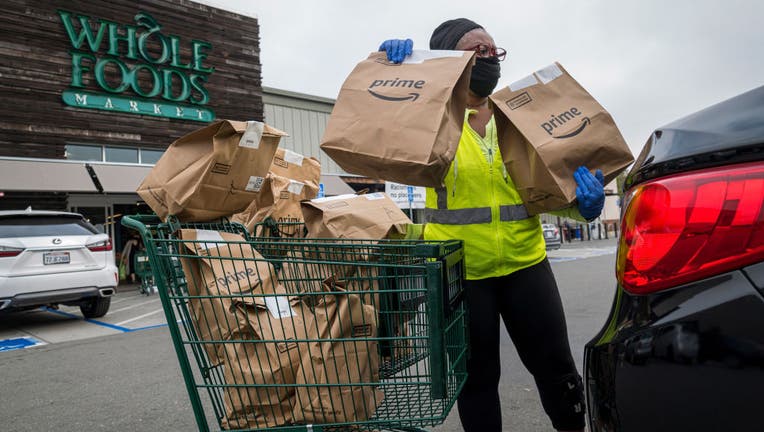 An independent contractor wearing a protective mask and gloves loads Amazon Prime grocery bags into a car outside a Whole Foods Market in Berkeley, California, U.S., on Wednesday, Oct. 7, 2020. With millions of Americans still sheltering in place and

Some Amazon Prime customers are suing the e-commerce giant due to a policy change that drops free delivery from Whole Foods.

The class-action lawsuit was filed in California.

The suit alleges Amazon misled customers by implying free delivery is still part of the Prime subscription and that the company advertised part of a price, revealing the fee at the end of the buying process.

FOX Television Stations has reached out to Amazon for comment.

Amazon will shutter six of its Whole Foods Market stores in the United States, according to FOX Business.

The impacted stores are located in Montgomery and Mobile, Alabama; Tarzana, California; the Engelwood and DePaul neighborhoods of Chicago, Illinois; and Brookline, Massachusetts. The Englewood location is expected to close in the coming months, while the other five stores are expected to close by May 6.

"As we continue to position Whole Foods Market for long-term success, we regularly evaluate the performance and growth potential of each of our stores, and we have made the difficult decision to close six stores," A spokesperson for Whole Foods told FOX Business. "We are supporting impacted Team Members through this transition and expect that all interested, eligible Team Members will find positions at our other locations."

An Amazon delivery driver came to the rescue of a 19-year-old and her dog as the two were being attacked by a larger dog in Las Vegas, Nevada, on Dec. 13. (Credit: Michael Ray via Storyful)

The spokesperson declined to disclose the total number of employees that would be impacted by the closures. The company has more than 530 Whole Foods locations nationwide.