PORTLAND, Ore. (AP) - The mayor of Portland, Oregon was tear-gassed by U.S. government agents as he stood outside a federal courthouse during another night of protests against the presence of federal police sent by President Donald Trump to quell the city's ongoing unrest.

Mayor Ted Wheeler, a Democrat, appeared slightly dazed and coughed and said Wednesday night it was the first time he’d been tear-gassed.

He put on a pair of goggles someone handed him and drank water but did not leave his spot at the front of the protest and continued to take tear gas as the demonstration raged — with protesters lighting a large fire between protective fencing and the Mark O. Hatfield Federal Courthouse amid the pop-pop-pop sounds of the federal agents deploying tear gas and stun grenades into the crowd.

It wasn't immediately clear if the agents knew Wheeler was among those in crowd when they used the tear gas.

Earlier in the night, Wheeler was mostly jeered as he tried to rally demonstrators who have clashed nightly with federal agents but was briefly applauded when he shouted “Black Lives Matter” and pumped his fist in the air.

In a tweet Thursday, Trump referred to Wheeler as the “Radical Left Mayor of Portland, who last night was booed & shouted out of existence by the agitators & anarchists.”

Wheeler has opposed federal agents’ presence in Oregon’s largest city. He has faced harsh criticism and his presence wasn’t welcomed by many demonstrators who yelled and swore at him.

“I want to thank the thousands of you who have come out to oppose the Trump administration’s occupation of this city," Wheeler told hundreds of people gathered downtown. “The reason this is important is it is not just happening in Portland ... we're on the front line here in Portland.”

Wheeler has been accused by critics including city council members of not reining in local police who used tear gas multiple times on protesters before federal agents arrived early this month in response to nearly two months of nightly protests since George Floyd was killed. And city business leaders have condemned Wheeler for not bringing the situation under control before the agents showed up.

Department of Homeland Security acting Secretary Chad Wolf denied that federal agents were inflaming the situation in Portland. He told “CBS This Morning” on Thursday that Wheeler legitimized criminality in the city by going to the front of the crowd of demonstrators where the fires were lit and people were trying to pull down the protective fence.

Wolf said Wheeler had cited violence in the city before federal officers arrived.

Wheeler did not participate in lighting any of the fires or attempting to tear down the fence and was surrounded by his security team when he was gassed.

Earlier, protesters held signs saying “Tear Gas Ted” in reference to the Portland Police Bureau's use of the substance before federal agents arrived. As Wheeler left the protest zone about 12:40 a.m. Thursday, one person shouted that he should be there “every single night.”

Less than an hour after Wheeler left, the Portland Police Bureau declared there was a riot at the site and threatened to use tear gas but officers never did and made no arrests.

In a statement later Thursday, police said the crowd threw Molotov cocktails, lit fires in a park and in trash cans and released hundreds of gallons of water from fire hydrants.

Before he was tear-gassed, Wheeler was criticized for cutting the local police budget and for not assigning Portland police to protect protesters from federal agents. 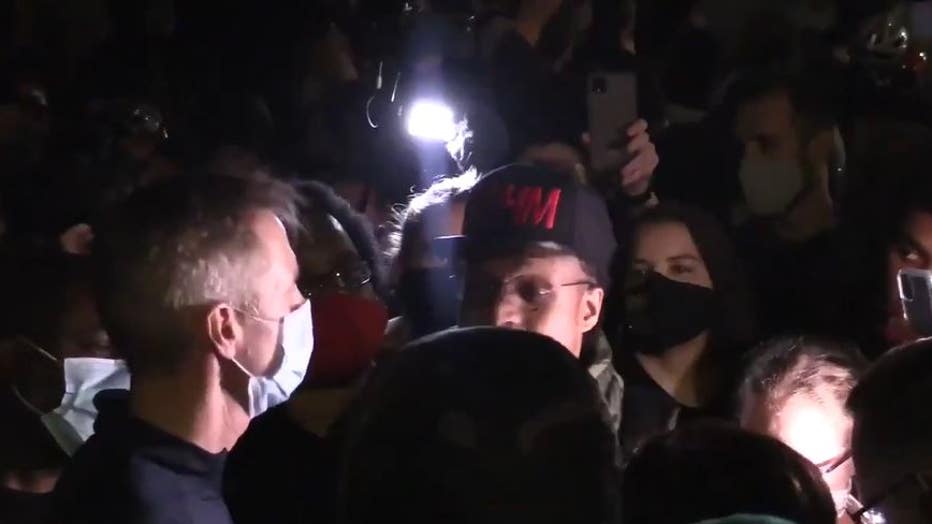 The mayor of Portland, Oregon, was tear gassed by federal agents late Wednesday as he stood with protesters at a fence guarding a federal courthouse. (Credit: @arfbradford via Storyful)

Wheeler's appearance in the protest zone came hours after state attorneys for Oregon urged a judge to issue a restraining order against agents deployed to tamp down on the protests.

The arguments came in a lawsuit filed by Oregon Attorney General Ellen Rosenblum, who accused federal agents of arresting protesters without probable cause, whisking them away in unmarked cars and using excessive force. Federal authorities have disputed those allegations.

The lawsuit is part of the growing criticism of Trump's order that sent the federal agents to Portland and pending orders for them to head to Chicago and Albuquerque, New Mexico, to fight rising crime.

Trump's move has deepened the country’s political divide and has potentially set up a constitutional crisis months ahead of the presidential election. Democratic mayors of 15 cities have condemned the use of federal officers in a letter to the U.S. attorney general.

The court hearing focused on the actions of the more than 100 federal agents responding to protests outside the Portland courthouse.

RELATED: Heavily armed US agents on city streets: Can Trump do that?

The motion asks U.S. District Judge Michael Mosman to command agents from the Department of Homeland Security, Customs and Border Patrol, Federal Protective Service and U.S. Marshals Service to immediately stop detaining protesters without probable cause, identify themselves and their agency before arresting anyone, and explain why an arrest is taking place.

On Thursday, a judge is expected to hear arguments in a legal challenge that the American Civil Liberties Union filed on behalf of journalists — including a freelance photographer for The Associated Press — and legal observers who say they were targeted by Portland police while documenting demonstrations.

The ACLU filed a lawsuit Wednesday on behalf of volunteer medics who have been attending to injured protesters.

Wheeler, 57, a sixth-generation Oregonian was born and raised in Portland and attended local public schools.