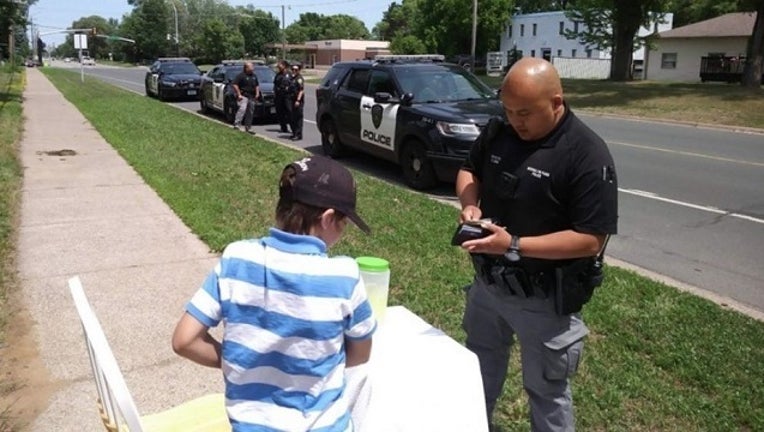 A group of police officers saved the day after a 9-year-old's lemonade stand was robbed by two older kids. (Photo courtesy of Mark Allen Newbauer)

Last Thursday, Gracen was taking advantage of the hot weather by setting up a lemonade stand in his Brooklyn Park, Minn., neighborhood.

“Lemonade on the right. Mostly in the morning,” Gracen hand wrote on a sign with an arrow directing potential customers to his table on the sidewalk.

That day the stand had been particularly popular, earning the young boy $20. However, his fortune was short-lived.

“Two junior high kids on bikes drove by his stand and stole $20 out of his cup,” Mark said. “Gracen called me up and asked me if he should call the police, and I said that he probably shouldn’t bother them, but I did pray for him over the phone using the verse from Proverbs 6:31 that says whatever the thief steals, he has to pay back sevenfold.”

Mark told KTIS he kept thinking about his son’s plight and called Gracen back to tell him to call the police.

“Later I called him back and told him to go ahead and call the police that if they weren’t busy maybe they would help him out. When I got home there were two Brooklyn Park police cars on the street in front of his lemonade stand and the nice lady officer told him she was going to replace his $20, and she said, ‘but I want Dad to hold on to it,’ so she gave it to me to hold for him. After that, a third police car showed up, and that officer asked for 4 cups of lemonade and gave him $5. By the end of the day, he had $50 because of the officers,” Mark said.

The next day, Mark said another officer stopped by his son’s stand.

“My wife and I were really blessed. In fact the next day another officer stopped by for lemonade, and she was out there with tears in her eyes thanking him. She couldn’t believe that people would do this for a child.  I had tears in my eyes too, that it was so precious that something so little could mean so much,” Mark told KTIS.

Gracen plans to thank the officers by bringing cookies and a thank you note to the department.