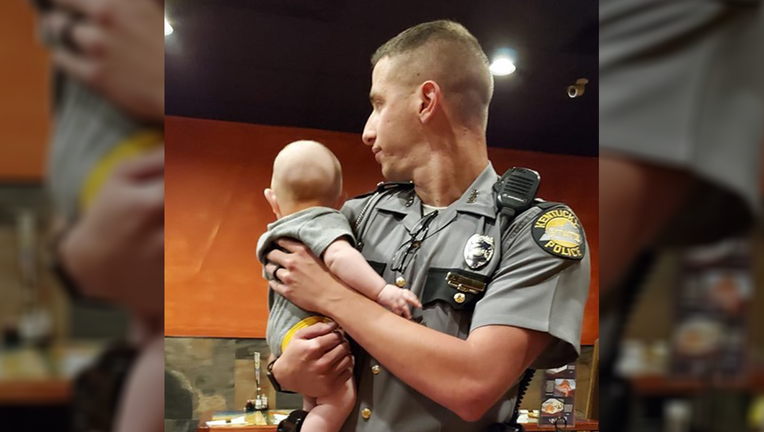 MUNFORDVILLE, Ky. - One kind-hearted police officer in Kentucky has been praised as a “fantastic officer” and “awesome gentleman” for taking care of a fussy baby in a restaurant so the youngster’s mother could have a moment to eat in peace.

Kentucky State Trooper Aaron Hampton stopped to eat at a Munfordville restaurant on Sunday when he saw fellow diner Tabatha Corbitt struggling to take a bite of her meal, as her baby Zerak, 3-months, was acting up, the New York Post reports. At one point, little Zerak reportedly grew so distraught that Corbitt was forced to stand up and try to eat with one arm.

As a first-time dad to a 15-month-old son, Hampton empathized with the woman. He approached the Corbitt family and offered to hold the baby to makes things a bit easier.

"I have a child of my own so I know how that goes. God put it on my heart to go and help her out,” the law enforcement official told WBKO.

Corbitt’s mother Karen Cox, was quick to snap a photo of the sweet scene and share it to Facebook, where it later circulated among police support group Kentucky Going Blue. Cox thanked the official for taking the time out of his own break to carry the “fussy” baby, who quickly relaxed once Hampton held him.

The image has since gone viral with over 1,200 likes and more than 480 shares to date.

“This is far beyond the ‘call of duty’!! Love this!!!” one commenter said, while others applauded Hampton as a “fantastic officer” and “awesome gentleman.”

Despite all the hype, Hampton said that taking a minute to calm down baby Zerak was simply the right thing to do.

“All glory goes to God. We had a fallen trooper, Eric Chrisman, who said ‘God first, family second, and everyone is family,’” he told the Post. “We treat everyone like we want our family treated.”

The officer’s wife, Kristen, said that the small act of kindness is just one example of her husband’s compassionate character.

“We have a 1-year-old and we know exactly what that’s like!" she told WBKO of the now-viral tale. "It is really cool though because he does help people a lot, but this time he actually got recognition."