DULUTH, Minn. (FOX 9) - Officials said they have a 36-year-old Duluth man in custody in connection to the fire that destroyed a synagogue last week in Duluth, Minnesota.

According to police, the man is being held pending first-degree arson charges.

Officials said they have a 36-year-old Duluth man in custody in connection to the fire that destroyed a synagogue last week in Duluth, Minnesota.

At about 2 a.m. Monday, firefighters responded to a fire at the Adas Israel Congregation Synagogue on East 3rd Street. Officials were able to contain the fire, but the building was destroyed. One firefighter was injured, but was later released from the hospital.

Police said there are currently no signs that the fire was a bias/hate crime, but the investigation is ongoing. Officials learned the fire started on the east side exterior of the building, and no accelerants were used in the fire.

Members of the local Jewish community spoke out Sunday, thanking the department for its work in the investigation.

Officials give updates after a synagogue was destroyed in an arson fire Monday in Duluth, Minn. A 36-year-old man is in custody.

"Their efforts were heroic. I stood there and watched as they went into a building that I later found out was still burning to go and try to save some of our artifacts, some of our Torahs and antiquities. The bravery of these men is just incredible, and I can't thank them enough," Rabbi Phillip Sher said.

Officials expect to release more information on the cause of the fire later this week.

Police said the suspect has no permanent address and did not have any previous contact with the synagogue.

Rabbi Sher said no donations are needed at this time.

FOX 9 policy states that a suspect will not be identified until the suspect has been formally charged. 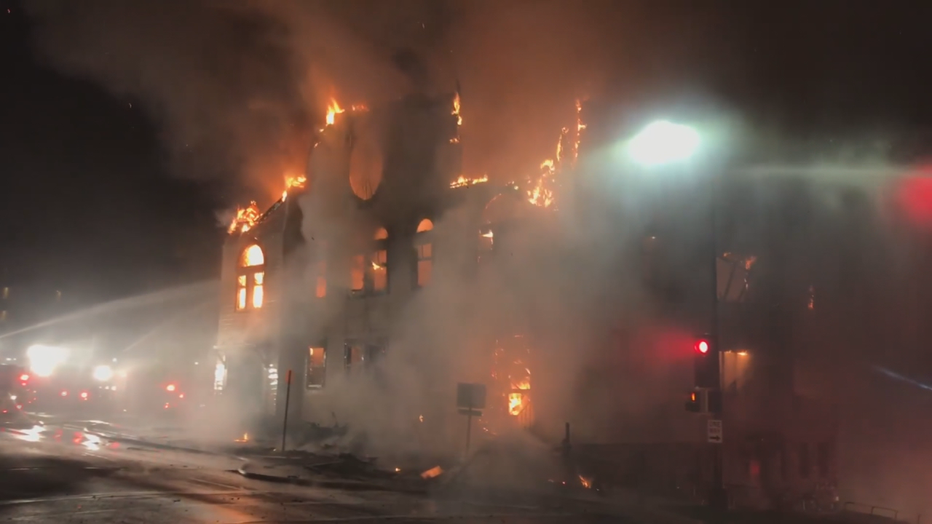 The synagogue burning as crews fight flames on Monday.