Police now tell us a 24-year-old man is dead after trying to blow up an ATM machine at Second and Susquehanna in Philadelphia.

PHILADELPHIA - Police now tell us a 24-year-old man is dead after trying to blow up an ATM in the city.

SkyFOX was over the scene at North Second Street and West Susquehanna Avenue on Tuesday morning. This happened around 6 a.m. outside Sidekicks Sports Bar.

There, investigators were looking over the automated teller machine with a smashed screen, a mangled keyboard, dangling components but a seemingly intact safe at the bottom.

FOX 29's Lauren Johnson reported that, according to police, the man was using explosives. He was seriously injured at the scene and was later pronounced dead at a hospital.

Sources tell FOX 29's Dave Schratwieser the man was shot after he set off the explosion and tried to make off with the cash.

Police are investigating at this location, and this does not appear to be the lone incident.

People have been phoning in similar reports throughout the night.

Earlier Tuesday, Johnson and her photographer visited a bank at West Girard Avenue and North 27th Street where there also had been reports of explosions in the neighborhood.

A FOX 29 photojournalists photographed another damaged at South 61st Street and Woodland Avenue. 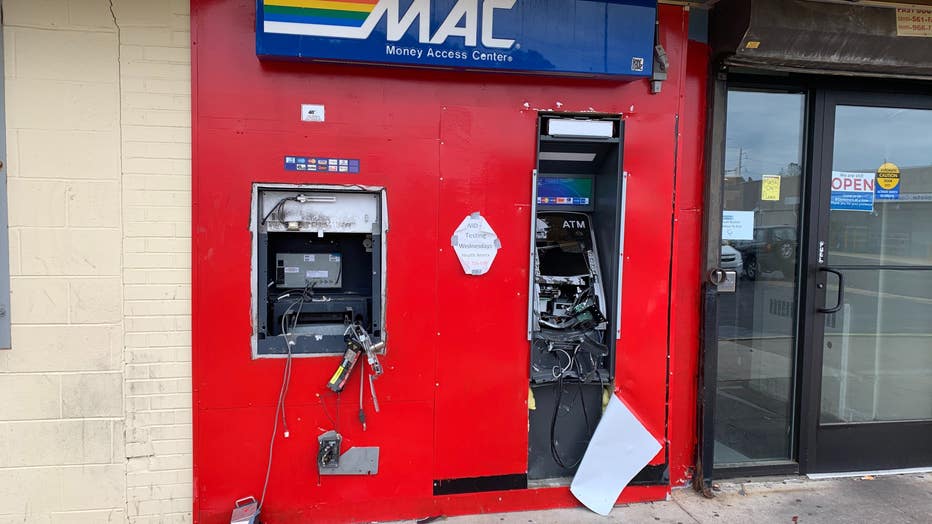 Police commissioner Danielle Outlaw said the thefts are believed to be “organized" and “coordinated" efforts and the federal Bureau of Alcohol, Tobacco, Firearms and Explosives is taking the lead in the investigation.