Police chief: Killing of St. Paul woman could have been prevented

A teen is in custody Tuesday night after a shooting last week left a woman dead, a shooting the St. Paul police chief says could have been prevented.

ST. PAUL, Minn. (FOX 9) - Police say a teen was arrested in Minneapolis in connection to the deadly shooting of a St, Paul woman on Feb. 16.

Police found Li suffering from a gunshot wound inside a vehicle outside a pizza restaurant after 911 calls around 6:45 p.m. last Wednesday on the 1000 block of Payne Avenue. St. Paul Fire medics transported her to the hospital, where she died shortly after.

The teen is currently in being held at Hennepin County Jail for second-degree murder and other crimes committed in the county. He's expected to be charged as an adult.

Sources told FOX 9 the teen has a stunning criminal history. For starters, he was given a 41-month stayed sentence in September for his role in an aggravated robbery where victims were held at gunpoint, one victim was shot. He was serving probation for this crime when Li was shot and killed.

In January 2021, he was involved in another carjacking. In June 2020, a victim was carjacked at gunpoint, and the juvenile suspect was given 180 days of probation. In October 2019, at 12 or 13 years old, he was arrested for fighting. He has also been involved or suspected in a burglary, aggravated robbery, discharging a weapon. At 14 years old, he was caught driving and in possession of a half bar of Xanax.

He's also currently a suspect in an active investigation from December, where two people were shot and injured.

"I’m grateful for and impressed by the incredible work our investigators and partners with Minneapolis police put into this case. Their diligence and determination made this arrest possible and took a violent teen off the streets.

Sadly, this is yet another example of how our system has failed to put victims first, failed to help a young person going down a dangerous and destructive path, and failed our entire community.

This tragedy was entirely preventable."

Julia (Yuliya) Li was a global business director at H.B. Fuller, the adhesive manufacturing Vadnais Heights-based company shared. Her colleagues remember her as "a young, vibrant woman with a lot to offer the world and a family who loved her deeply."

"This tragic, senseless violence brought an end to the life of a bright, well-respected, committed, hard-working professional who will be greatly missed by everyone who knew her," Jim Owens, president and CEO, H.B. Fuller, said in a statement. "It is even more gut-wrenching to learn that, had this young suspect not fallen through the cracks and had he received proper guidance and support, a community would not have been terrorized, and Julia would be alive today."

H.B. Fuller said Li, who was originally from Kazakhstan, moved to the U.S. in 2007 to study economics and global studies at the University of Minnesota. She left the Twin Cities to work in brand management and marketing at GE and Proctor & Gamble. She returned in 2016 to get her master's degree in business administration at the University of St. Thomas.

She joined H.B. Fuller for a marketing role in 2017, eventually moving to her role of global business director and leading the company's Amazon business project.

The company said Li is survived by her parents, sister and husband.

St. Paul Police are investigating after a woman was shot and killed on the 1000 block of Payne Avenue Wednesday night. 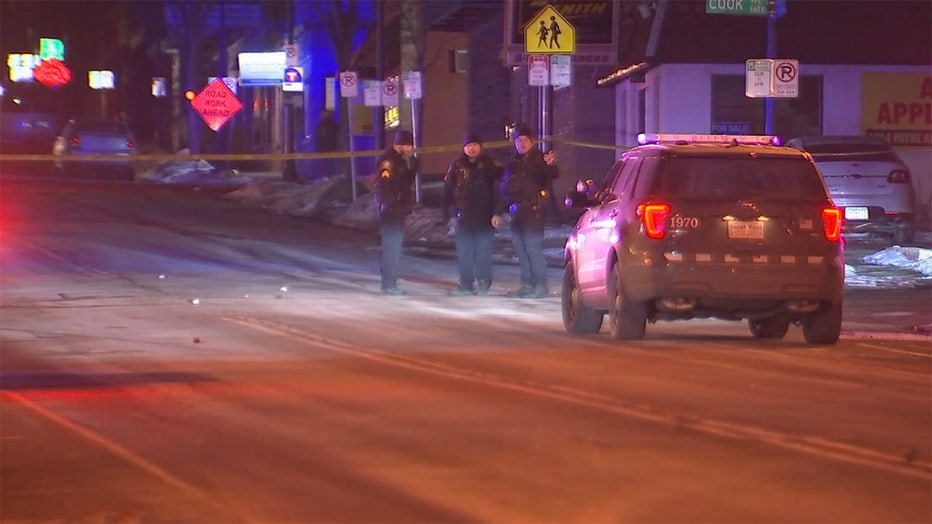 St. Paul Police are investigating a woman being shot and killed on the 1000 block of Payne Avenue Wednesday night.

Police responded to 911 calls of a woman unconscious after being shot near the intersection of Payne Avenue and Cook Avenue around 6:45 p.m. Wednesday. Officers say they found Yuliya Li, 34, of Saint Paul, suffering from a gunshot wound inside a vehicle outside a pizza restaurant.

The woman was transported to Regions Hospital, where she died shortly after.

St. Paul Police: Woman in her 30s dies after found shot in a vehicle

St. Paul Police are investigating after a woman was shot and killed on the 1000 block of Payne Avenue Wednesday night.

Investigators have not determined a motive and asked for anyone in the area who saw anything to call the police at 651-266-5650.

"We know that's a busy area. We know there were people around. There's a restaurant right there where she was shot," Steve Linders, a spokesperson for the St. Paul Police Department, said after the shooting. "It's possible whoever pulled the trigger disappeared into the neighborhoods, so if you saw something, even if it seems miniscule, even if it seems insignificant to you, call us because it could help move this case along."

This was the seventh homicide in St. Paul this year.