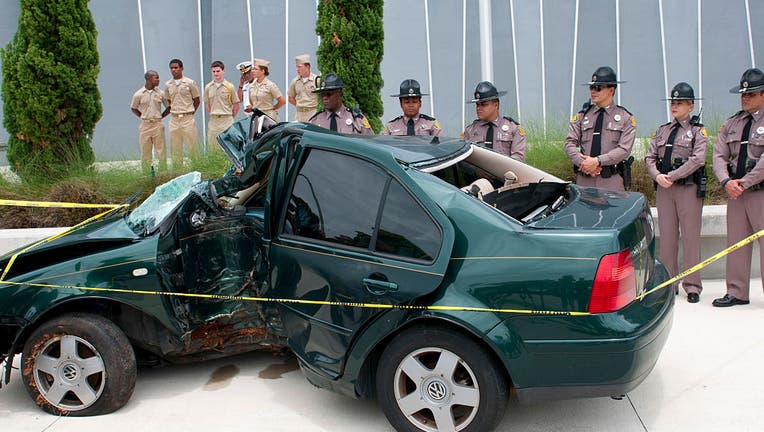 A new study shows the benefits of states passing and enforcing sweeping cellphone laws in an effort to reduce vehicle crashes.

Researchers at Insurance Institute for Highway Safety studied crash rates in Oregon, Washington and California where state leaders have prohibited drivers from holding or using a phone or similar electronic devices on a public road.

According to the IIHS, Oregon and Washington have broadened their laws to ban any "holding" of a cellphone even when the vehicle is stopped temporarily because of traffic or other momentary delays.

However, in California, the state has used similar language but doesn’t state if the ban applies when the vehicle is temporarily stopped. The law also prohibits "holding and using" a cellphone— which allows cited drivers to argue they were simply holding a cellphone but not using it.

A truck driver who was captured on camera using his mobile phone ahead of a dramatic collision in Sussex, England, was jailed on July 27.

The researchers looked at the laws’ effect on police-reported rear-end crashes. Rear-end crashes were chosen because many are associated with cellphone use.

In its study, the IIHS found that monthly crash rates per 100,000 people dropped significantly in Oregon and Washington, but not in California.

To determine the effect of the law, researchers compared monthly crash rates between 2015 and 2019. They used Idaho and Colorado as control states where texting bans are in place but not outright cellphone use.

Results showed the rate of police-reported rear-end crashes of all severities did not change in California. However, crash rates dropped 8% in Washington compared with Colorado and Idaho.

In addition, the monthly rates of rear-end crashes with injuries stayed the same in California between 2015 and 2019. Oregon and Washington saw a downward trend when they broaden their cell phone laws.

The greater clarity of the Oregon and Washington laws, especially with regard to temporary stops, may partly explain their greater success, Ian Reagan,a senior research scientist. said in a news release.

Reagan said other factors for the disparities could include the penalties drivers face when violating the ban. For example, in Oregon, a third offense can lead to a $2,000 fine, a criminal misdemeanor charge and six months in jail, according to the IIHS.

Researchers believe states should enforce and use plain, straightforward language to ban all hand-held cellphone use while driving, including simply holding the device.

"Technology is moving much faster than the laws," Reagan added. "One solution may be to make them broader, rather than trying to come up with an exhaustive list of banned behaviors."

"Our findings suggest that other states could benefit from adopting broader laws against cellphone use while driving, but more research is needed to determine the combination of wording and penalties that is most effective," he continued.