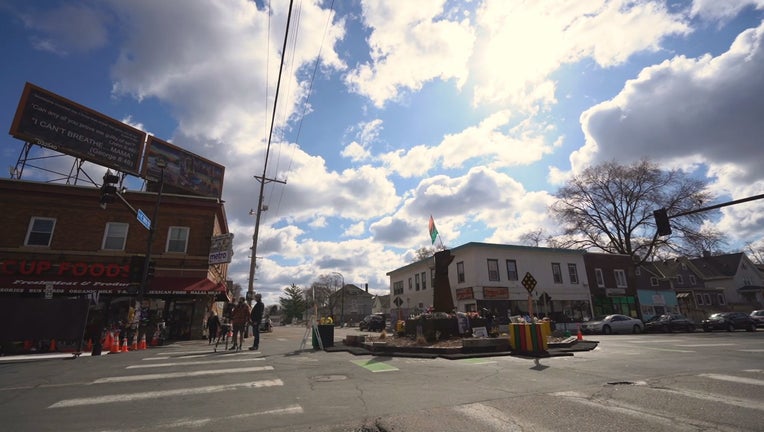 Nervousness filled the air on the eve of opening statements in the trial of Derek Chauvin for the murder of George Floyd.

MINNEAPOLIS (FOX 9) - With the start of opening statements in the Derek Chauvin murder trial less than a day away, there was a fair amount of nervousness at 38th and Chicago Sunday.

It’s going to be difficult to watch," Kai Goldynia said of the trial. "I think there’s going to be a ton of emotions, and I think we just need to see that justice actually is served in this case."

With the start of opening statements in the Derek Chauvin murder trial less than a day away, there was a fair amount of nervousness at 38th and Chicago&nbsp;Sunday.

"This case is about Derek Chauvin, this is not George Floyd on trial. The narrative needs to change," George Floyd’s family spokesperson Kevin McCall said.

People that paused to pay their respects to Floyd told FOX 9 that his family remains in their thoughts.

"My heart goes out to them. I can’t imagine what it would be like to lose a family member the way they had to and to see it on camera like that," Kieran Knutson said of Floyd’s family. "I think that they’ve been very strong in standing up and demanding justice for their family."

Video of Floyd’s last moments has been seen around the world, but it’s still not easy to watch for many.

"I mean I broke down, I couldn’t eat, I couldn’t sleep for 24 hours," Kai Goldynia said. "It was that impactful."

"It’s insane, it’s crazy, it made me angry and sad," Knutson added.

"He’s very much optimistic, his heart is still bleeding," McCall said. "He knows that his brother George Floyd cannot speak for himself, so he wants to make sure that his voice is echoing. He’s going to be here for the duration of the trial, he’s going to be in the courtroom several times throughout the trial."

McCall says the Floyds are calling for peaceful protests during the trial, saying violence will not bring George Floyd back.

"Don’t do it in the name of George Floyd, because you’re not representing his legacy," McCall said.