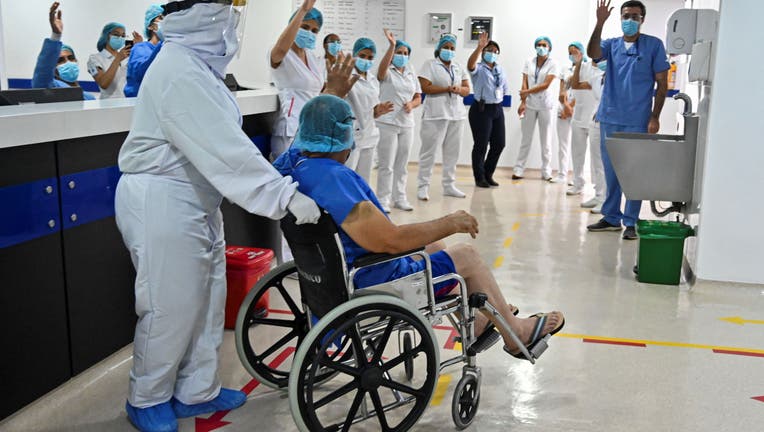 FILE - Health workers wearing biosafety suits cheer as a 60-year-old man (on wheelchair) who recovered from the novel coronavirus COVID-19 is being released from Clinica Desa hospital in Cali, Colombia, on May 18, 2020. (Photo by LUIS ROBAYO/AFP via Getty Images)

LOS ANGELES - More than 10 million people have recovered from COVID-19 around the world, according to the most recent data available from the Johns Hopkins Coronavirus Resource Center. But other developments amid the COVID-19 pandemic suggest that the damage from the novel coronavirus is far from finished.

This week, the U.S. surpassed a grim milestone: More than 150,000 people have died since the outset of the pandemic in the country — far and away the worst death toll in the world.

While deaths from the coronavirus in the U.S. are mounting rapidly, public health experts are seeing a flicker of good news: The second surge of confirmed cases appears to be leveling off.

The American Red Cross tweeted on Tuesday a need for the plasma of fully recovered COVID-19 patients due to an emergency shortage.

Scientists aren’t celebrating by any means, warning that the trend is driven by four big, hard-hit places — Arizona, California, Florida and Texas — and that cases are rising in at least half of all the states, with the outbreak's center of gravity seemingly shifting from the Sun Belt toward the Midwest.

Some experts wonder whether the apparent caseload improvements will endure. Nor is it clear when the trend in deaths might change direction. COVID-19 deaths do not move in perfect lockstep with the infection curve, for the simple reason that it can take weeks to get sick and die from the virus.

Over the past week, the average number of deaths per day in the U.S. has climbed more than 25%, from 843 to 1,057.
Florida on Thursday reported 253 more deaths, setting its third straight single-day record. The number of confirmed infections nationwide has topped 4.4 million.

The milestone comes at a time when the Associated Press reported that the U.S. economy plunged at an 32.9% annual rate in the April-June quarter — by far the worst quarterly plunge on records dating to 1947. And more than 1.4 million laid-off Americans applied for unemployment benefits last week, further evidence that employers are still shedding jobs five months into the crisis.

Frustrated negotiators of a massive U.S. coronavirus relief bill face heightened pressure with the latest bleak economic news and the rapidly approaching lapse in a $600 per-week expanded jobless benefit that has helped prop up consumer demand.

So steep was the economic fall last quarter that most analysts expect the economy to produce a sharp bounce-back in the current July-September period. Yet with the rate of confirmed coronavirus cases having surged in a majority of states, more businesses being forced to pull back on reopenings and the Republican Senate proposing to scale back government aid to the unemployed, the economy could worsen in the months ahead.