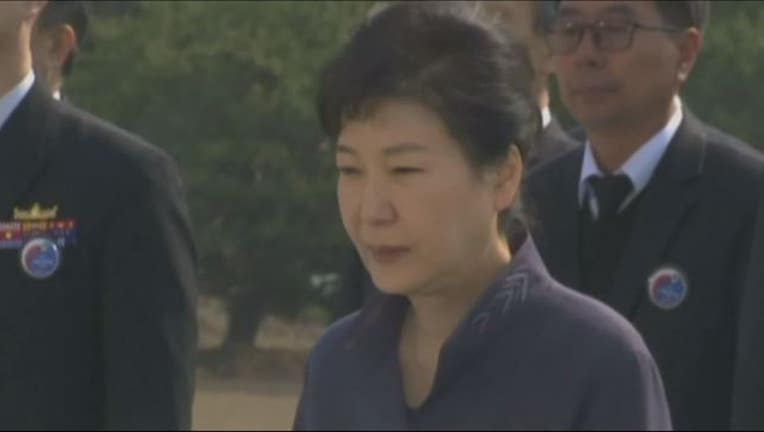 South Korean President Park Geun-hye vacated the presidential palace and returned to her home on Sunday after the Constitutional Court removed her from office.

SEOUL, South Korea (AP) - Ousted South Korean President Park Geun-hye expressed defiance toward the corruption allegations against her as she vacated the presidential palace and returned to her home on Sunday, two days after the Constitutional Court removed her from office.

In her first public comments since the court's ruling, Park said in statement, "Although it will take time, I believe the truth will certainly come out."

Park will likely face a direct investigation soon by prosecutors who already consider her a criminal suspect over suspicions that she colluded with a confidante to extort money and favors from companies and allowed the friend to secretly interfere with state affairs.

Upon her return home, Park was greeted by hundreds of supporters who thunderously chanted her name and waved the South Korean flag as her bodyguard-flanked black sedan slowly rolled onto a path near the house. Park, dressed in a dark blue coat and her hair tied in a bun, smiled and waved from inside the car. She then stepped out and shook hands and exchanged brief words with members of her political party before going inside the house.

In her statement, which was read to reporters by Min Kyungwook, a lawmaker from her conservative party and her former spokesman, Park also expressed gratitude to her supporters and apologized for "failing to fulfill my duty as president."

Prior to Sunday, she had apologized for putting trust in her jailed friend, Choi Soon-sil, but strongly denied any legal wrongdoing.

Youn Kwansuk, the spokesman for the liberal Democratic Party, the largest in parliament, called Park's statement "shocking" and "very regrettable" because she did not express remorse.

"Former President Park will now be investigated by prosecutors as a civilian and as a criminal suspect," Youn said in a statement. "So it's very regrettable that former President Park decided to waste her last opportunity to come before the nation and show responsibility."

Park no longer has immunity from prosecution and may face criminal charges including extortion, bribery and abuse of power.

The Constitutional Court formally removed her from office on Friday, upholding an impeachment motion filed by lawmakers in December that followed weeks of massive protests by millions of people calling for her ouster.

The ruling ended a power struggle that had consumed the nation for months and marked a stunning downfall for Park, who convincingly defeated her liberal opponent in 2012 with overwhelming support from older South Koreans, who remembered her dictator father as a hero.

Her departure from the presidential Blue House on Sunday evening came a day after tens of thousands of opponents and supporters divided the streets of downtown Seoul with massive rallies, reflecting a nation deeply split over its future. Three people died and dozens were injured in violent clashes between Park's supporters and police following the court's ruling on Friday.

Park took her time to bid farewell to hundreds of presidential staff members before leaving the Blue House in a motorcade, said presidential spokesman Kim Dong-jo.

Hundreds of supporters stood near her private house for hours waiting for her to return home. They waved the South Korean flag and photos of Park and her late father, Park Chung-hee, singing the national anthem and shouting "Nullify impeachment!"

Workers were earlier seen unloading a television, washing machine, bed and other items from trucks and carrying them into Park's house.

South Korea now has to elect a new president by early May. Opinion polls show the Democratic Party's Moon Jae-in, who lost to Park in 2012, as the favorite to become the country's next leader.