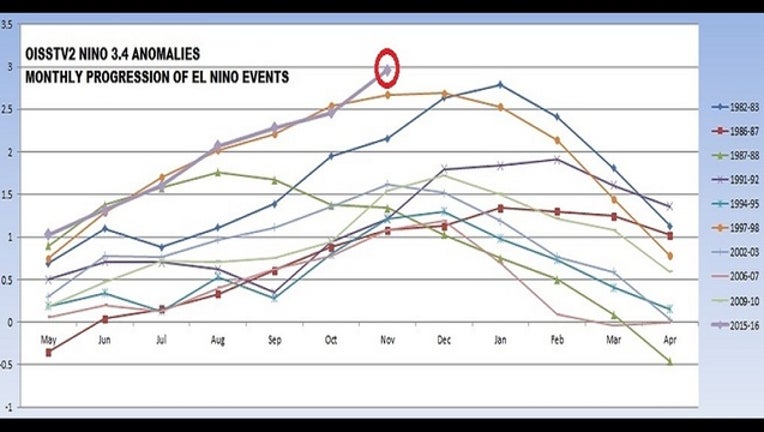 KMSP - Now that we are well into fall and approaching the official start of winter season, our current El Nino is really being felt.  Snowfall was pretty minimal in Minnesota in November and it doesn’t look like we are going to get more anytime soon.  But this El Nino is now different than many over the last 3 decades.  A reminder that El Nino is the term used when sea surface temperatures along the equatorial Pacific are far above average.  Check out the temperatures compared to average last week…

A classic looking signature as there is a very large east west band of very warm temperatures around the equator.  But now the index that has been developed to show us different levels of El Nino and its opposite, La Nina, is now at a level we have never seen before rounding out the month of November.  The index is now approaching 3 which hasn’t happened in more than 30 years.

The index indicates strength of El Nino by assigning a number to it, with anything under a 1 considered weak, 1-2 considered moderate, and anything over 2 considered to be strong… and we have almost hit 3!  So what does this mean for our weather?  Well honestly, we don’t know.  We haven’t been in a position like this in a LONG time, and with our advances in technology since this last happened, we aren’t sure what that may do for forecasting.  But we still expect temperatures to continue to be above average.  As for precipitation, it’s anyone’s guess.