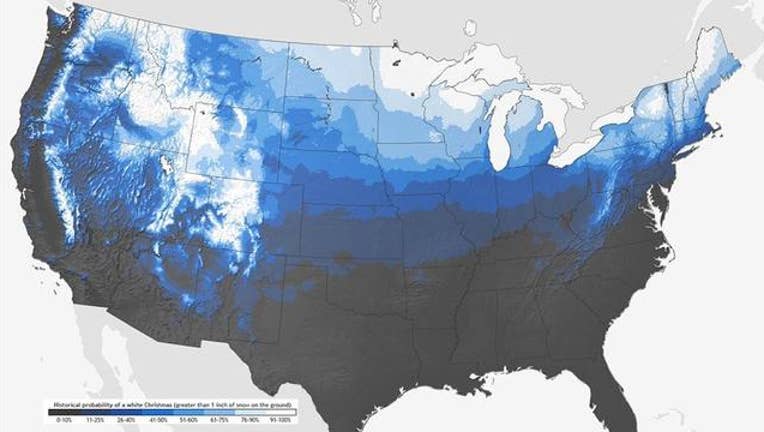 KMSP - In any given year, our chances to find some snow on the ground Christmas morning are quite good.  In fact, the state as a whole has some of the best chances in the nation to see some piles of snow when the sun rises on that very happy day.  So how good?  Well, if we look back at history, much of Minnesota has anywhere from a 60 to 90 percent chance depending on your location from the highest chance in the Arrowhead, to the lowest chance near the Iowa border.  For the metro as a whole, generally 3 out of 4 Christmases are white with our historic probability just under 75%.  But as I’m sure you are aware, this is an El Nino year.  Not only that, but a strong El Nino year.  So what does that mean for our snow?  Well, it means it’s far less likely to fall.  In strong El Nino years, temperatures are often times warmer than average… we have seen this over the last 3 months already.  So naturally, the extra warmth gives us less conducive conditions for snow, AKA less cold air to support it.  Take the last 5 strong El Nino years for example.  Decembers of 1997, 1982, 1972, 1965, and 1957 were all fairly strong El Nino winters.  The image below shows the temperature anomalies (departure from average) the country was in those years.

For Minnesota, it’s pretty clear that we were far warmer than average.  If you go back and look at the snow cover for Christmas morning, only 1 of the 5 years had snow on the ground with a 3 inch coating on Christmas in 1972.  The other years were brown Christmases.  1 in 5 is not a good number if you want the classic look to Christmas and FAR lower than our “typical” year.  While this does not guarantee a brown Christmas, especially since a pattern change is on its way for the second half of the month, it doesn’t give us a lot of hope.