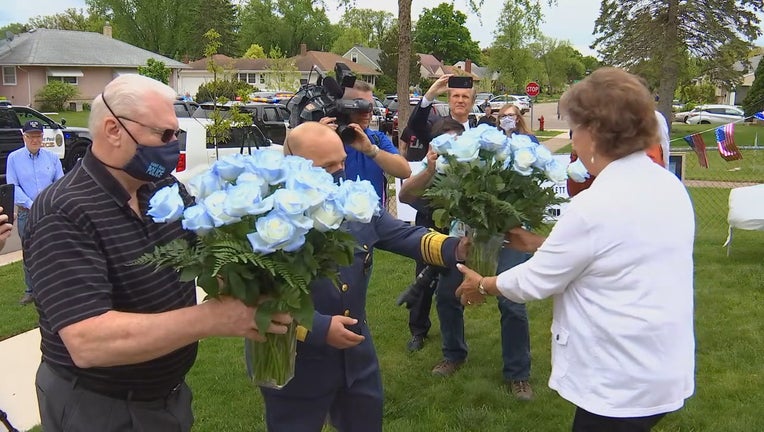 Jeanette Sackett, the widow of Officer Jim Sackett, received 50 blue roses from St. Paul Police Chief Todd Axtell - one rose for each of the years since her husband's death. (FOX 9)

ST. PAUL, Minn. (FOX 9) - On the 50th anniversary of a day that shook the St. Paul Police Department, officers paid tribute to remember a fallen officer and his widow.

Friday afternoon, police held a procession for Officer Jim Sackett, who was shot and killed in the line of duty on that tragic day decades ago. Following the procession, St. Paul Police Chief Todd Axtell presented Jeanette Sackett 50 blue roses, one for each year without her husband.

On 50th anniversary of his death, St. Paul police honor officer killed in line of duty

On the 50th anniversary of a day that shook the St. Paul Police Department, officers paid tribute to remember a fallen officer and his widow.

“Well, here we are 50 years to the day where a young man put on his uniform to go out and protect the citizens of St. Paul,” said Axtell.

Officer Jim Sackett and his partner were answering a call on Hague Avenue. It was an ambush. Two young men shot Sackett from across the street with a rifle.

“Jim and Glenn went out to serve that night,” said Axtell. “They went to help out a young lady giving birth and they get there and they were set up. And our hearts go out to you and your family and we just want to give you this badge to honor his memory.”

Badge number 450 still belongs to Sackett and always will.

“Well, 50 years ago I was crying,” said Jeanette Sackett. “A broken heart. The loss of my husband, my kids’ father. A heck of a policeman. And I’m crying again today.”

Tears of loss and sorrow that can never really heal.

“All the tears I’ve shed through the years is worth it today,” she said.

It took 35 years before police were able to charge two men in Officer Sackett’s murder. One of them, Ronald Reed, is still in prison.