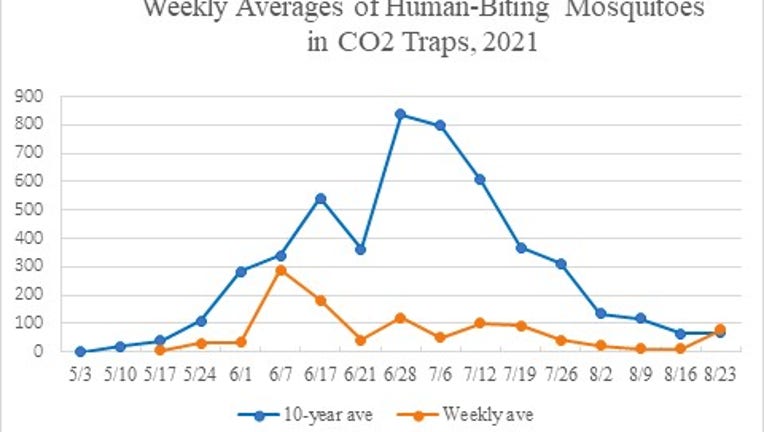 (FOX 9) - Officials say that for the first time this year, weekly mosquito numbers exceeded the 10-year average - even before this past weekend's rain. Now, the Metropolitan Mosquito Control District says it's expecting numbers to increase significantly this week and next.

Every Monday night starting in mid-May through September, the Metropolitan Mosquito Control District sets out a variety of mosquito and black fly traps throughout the district and employs a network of sweep net collections done by employees and volunteers. Any insects collected are brought back to the lab to be identified throughout the week.

According to the district, results from the Aug. 23 surveillance show that even before the big rains from the end of last week, mosquito numbers were ticking up in some areas. The district said the increase was mainly driven by CO2 traps along the Minnesota River, which collected over 1,000 summer floodwater mosquitoes.

At the end of last week, most of the Twin Cities metro received more than 3 inches of rain, so crews have been out all weekend checking to see where larvae has developed. According to the district, quite a few ponds and wetlands that were mostly dry have now seen an increase in water level, and many are holding mosquito larvae. Helicopters will be up throughout the early parts of this week to respond to the most recent brood of mosquitoes.

Officials also said they are still seeing more Culex mosquitoes, which are the genus most likely to transmit West Nile virus to humans. However, MMCD assistant entomologist Scott Larson said that thanks to CO2 traps, the numbers are trending downward.

The MMCD said West Nile virus still remains a threat to residents of the District at this point in the year, however. MMCD vector ecologist Kirk Johnson reported that 9 more pools of mosquitoes that were collected last week have tested positive for West Nile virus - 4 from Ramsey County, 2 from Hennepin County, 2 from Dakota County, and 1 from Anoka County. This brings the season total to 41 positive samples collected in almost every county in the District. Residents are advised to lower their risk of mosquito-borne disease by wearing insect repellent and avoiding peak feeding times of dusk and dawn.

Meanwhile, on Monday, the Minnesota Board of Animal Health reported a horse in Wadena County is recovering after testing positive for West Nile virus.

For more information on the mosquito collections and data, click here.