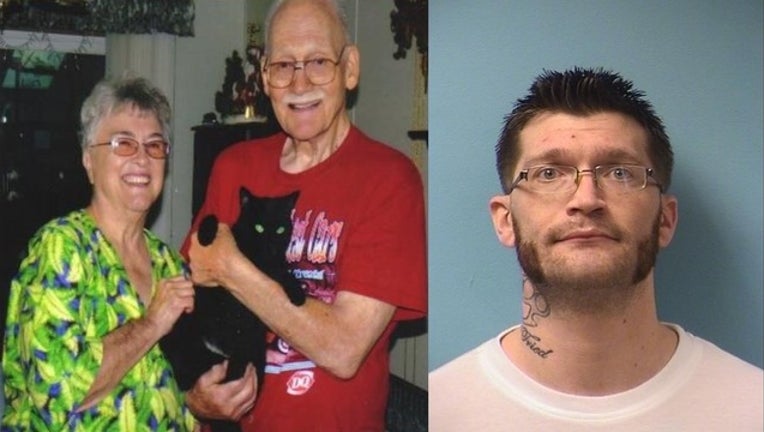 ST. CLOUD, Minn. (KMSP) - A Minnesota man was indicted Tuesday by a grand jury for the alleged murder of his grandparents last month in Kandiyohi County, adding four counts of first-degree murder to a pair of second-degree murder charges that were levied last month.

If convicted, the new charges carry a potential sentence of life imprisonment--making the grand jury indictment a requirement for the case to proceed under Minnesota law.

Gregory Scheel of Paynesville, Minn., was originally charged last month with two counts of second-degree murder after authorities found Wilbert Scheel, 93, and Gloria Scheel, 80, dead in their car on the side of a road in Colfax Township, Minn. The 33-year-old was found on foot about a half-mile away after authorities discovered the tread pattern on his shoes matched that of footprints found near the driver’s side door of the car.

Police believe Gregory Scheel strangled his grandmother with an extension cord and suffocated his grandfather with a plastic bag after binding his arms and legs, later covering them with a section of carpet before fleeing the scene on foot.

The murders shocked the small central Minnesota town, where friends of the elderly couple said they were well-known and well-liked.

"They're the best people around; you can't find any better people than Willie and Gloria," said Paynesville native Tom Quarfot.

"I was shocked. They’re two good people and didn’t deserve that," said another friend, Dean Rien.

Gregory Scheel remains in the Stearns County Jail on a $1.5 million conditional bail and is expected to make his initial appearance on the new charges Wednesday at 9:45 a.m.