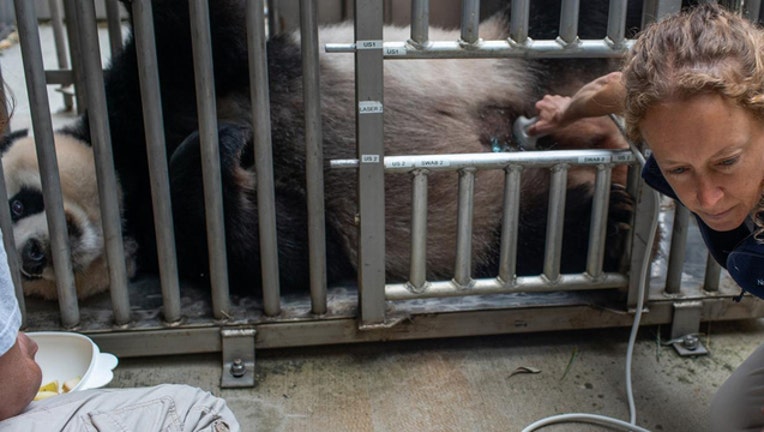 Giant Panda Mei Xiang being checked on by zookeepers at National Zoo.

WASHINGTON - The National Zoo said on Sunday that they are closing their Giant Panda Habitat temporarily while they keep a close eye on mother panda Mei Xiang who may be pregnant!

Zookeepers could not confirm if Mei Xiang is actually pregnant but they say she is "exhibiting expected, normal behaviors after the secondary hormone rise" -- but this could mean either a pregnancy or a psudeo (false) pregnancy -- which happened in 2017.

Panda experts at the zoo say pandas, like several other species, can undergo pseudopregnancies, where their bodies go into pregnant mode and do everything they would if they were actually pregnant.

The National Zoo says Mei Xiang is building a nest in her den, has a decreased appetite, is sleeping more and is reacting to loud noises.

Giant pandas Tian Tian and Bei Bei will be viewable in their outdoor yards until 2 p.m. daily.

The National Zoo says they'lll continue to share updates via social media -- or panda fans can sign up for the Giant Panda Bulletin and the Panda Cam is still up.