WASHINGTON - The number of National Guard troops coming to Washington D.C. next week to assist with security continues to grow.

According to the Associated Press, Army Gen. Daniel Hokanson, chief of the National Guard Bureau, announced this to Vice President Mike Pence at a briefing Thursday.

Officials have said the number of troops could continue to grow as law enforcement agencies review any ongoing or potential threats.

D.C. Police Chief Robert Contee estimated Wednesday that more than 20,000 National Guard members would be active in the city on Inauguration Day. But officials said Thursday that law enforcement had requested many more, and the number approved by the Pentagon is now 21,000.

As of Thursday, there were roughly 7,000 already in Washington, with thousands more en route. The length of their missions may vary, but Defense Department officials were authorized to deploy the Guard for up to 30 days for the inauguration and surrounding protests.

Last week’s "violent insurrection" at the Capitol by supporters of outgoing President Donald Trump has "impacted the way we are approaching working with our federal partners in planning for the 59th inauguration," Bowser said Wednesday.

The Washington National Guard is set to deploy 400 troops to Washington, D.C. to support the inauguration of U.S. President-elect Joe Biden.

On Thursday, California Gov. Gavin Newsom announced details for plans to protect critical infrastructure, including the State Capitol, with the deployment of 1,000 National Guard troops.

State officials also erected a temporary chain link fence around the California state Capitol on Thursday, bolstering other temporary and permanent barriers. The California Highway Patrol also is refusing to issue permits for rallies at the Capitol.

A day earlier, California officials released a statement that said Capitol grounds in Sacramento would be secure, but they did not go into detail about their plans. 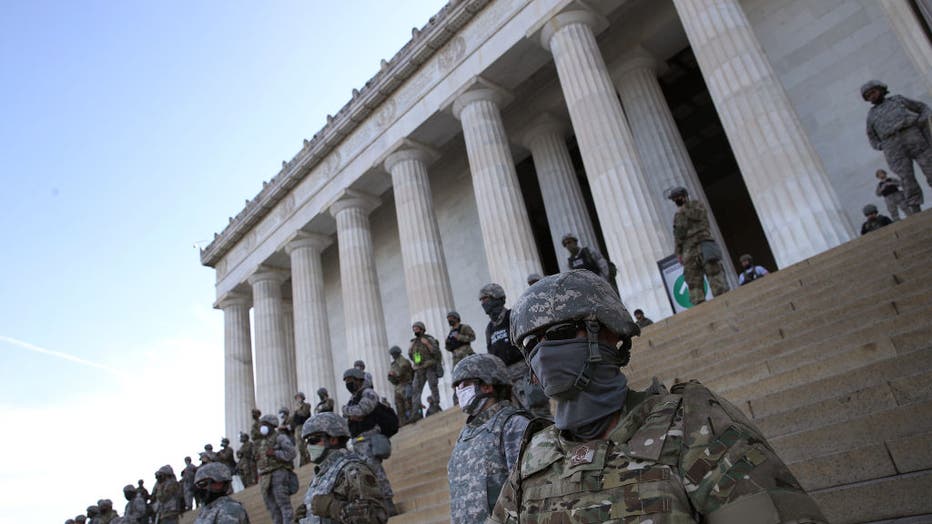 Members of the D.C. National Guard stand on the steps of the Lincoln Memorial as demonstrators participate in a peaceful protest against police brutality and the death of George Floyd, on June 2, 2020 in Washington, DC.

On Thursday. Hawaii Gov. Ige announced that 200 National Guard members would be sent to the Capitol, as well to help aid in the peaceful transition of power.

Meanwhile, Colorado is deploying at least 200 National Guard soldiers for the event the Colorado Sun reported.

Nearly, 500 Arkansas National Guard troops and airmen have been activated to support the presidential inauguration.

"In advance of the presidential inauguration on Jan. 20 & subsequent federal warnings of potential activity at State capitols, I ordered the @NVNationalGuard to assemble a quick response unit within the State to support ongoing interagency law enforcement efforts, as necessary," Sisolak tweeted Thursday.

These developments come in the wake of last week's violent pro-Trump mob attack at the U.S. Capitol and credible threats ahead of the Jan. 20 inauguration.

States nationwide have already been stepping up security in preparation for possible armed protests and violence this weekend, particularly at statehouses amid legislative sessions and inaugural ceremonies.

Officials are reassessing their security plans for high-risk targets and police in major cities are preparing to be put on tactical alert if necessary. An FBI bulletin earlier this week warned of potential armed protests in all 50 states.

The FBI said it is currently tracking  an "extensive amount of concerning online chatter," including calls for armed protests leading up to next week's presidential inauguration, Director Chris Wray said Thursday.

Wray, in his first public appearance since the Jan. 6 riot at the U.S. Capitol, said in a security briefing for Pence that the FBI remains concerned about the potential for violence at protests and rallies in Washington and in state capitols around the country.

Those events could bring armed individuals near government buildings and elected officials, Wray warned, while also noting, "One of the real challenges in this space is trying to distinguish what’s aspirational versus what’s intentional."
Wray said the FBI was receiving a "significant" amount of information that it was pushing out to other law enforcement agencies ahead of the inauguration.

Information-sharing is critical before any significant public event like the inauguration, but the issue is receiving particular scrutiny because of signs law enforcement was unprepared for the violent, deadly surge at the Capitol by loyalists of President Donald Trump.

President Trump released a video on Jan. 13 after getting impeached.

Separately the vice president visited with guard troops keeping watch outside the Capitol, telling them he’s familiar with the National Guard because he used to be a governor.

"Thank you for stepping forward for your country," Pence said. He told the troops they would be get to witness the transfer of power and thanked them for their service.

"It’s been my great honor to serve as your vice president," Pence added, before ending with another round of thanks and wishing the troops a "safe inauguration and a swearing-in of a new president and vice president."
In response, the guardsmen yelled, "Hooah."