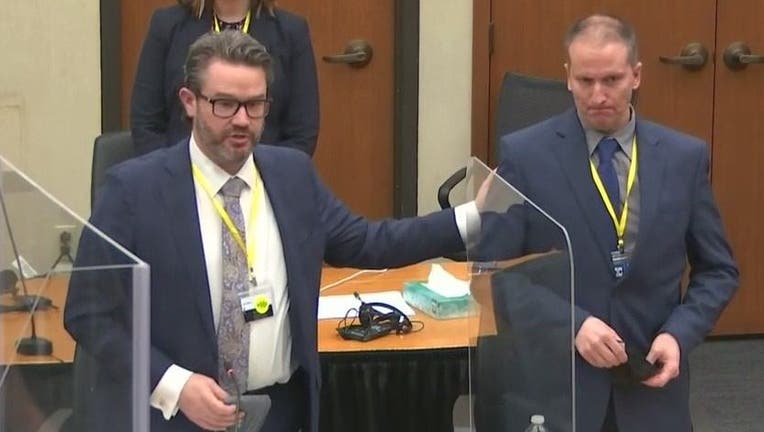 MINNEAPOLIS (FOX 9) - Judge Peter Cahill reluctantly put the charge of Murder in the Third Degree back on the table Thursday for jurors in the trial of former Minneapolis Police officer Derek Chauvin.  The Minnesota Court of Appeals left him little choice.

But the controversy over the Murder in the Third statute, and particularly its use in police killings, is far from over.

Friedberg and other legal experts said it is noteworthy how quickly the Minnesota Supreme Court said it would review the Appeals Court decision upholding the conviction of former Minneapolis Police officer Mohammed Noor for Third Degree Murder in the killing of Justine Damond.

Likewise, former Ramsey County Attorney Susan Gaertner believes "the law around Third Degree Murder is unsettled," and will be resolved by the Minnesota Supreme Court when it hears arguments in the Noor case in June.

The Minnesota Murder in the Third Degree statute is a linguistic minefield.  It reads, "Whoever, without intent to effect the death of any person, causes the death of another by perpetrating an act eminently dangerous to others and evincing a depraved mind, without regard for human life, is guilty of murder in the third degree..."

The term ‘depraved mind’ isn’t defined in statute, and Cahill is unlikely to define it for the jury in the Chauvin trial. Jurors have also been known to struggle with ‘eminently dangerous.’

But the real linguistic nightmare is the innocuous word, ‘others,’ and whether that term could apply to a single individual.  The Minnesota Court of Appeals, in a 2-1 ruling, said it could.

"It’s what we call a Mardi Gras statute," he said.  "You’re at Mardi Gras and you shoot your pistol straight up in the air and the bullet comes down and kills someone."

"And nothing that Chauvin did was eminently dangerous to others.  Nobody else could’ve been hurt by his actions," Friedberg said.

For prosecutors, Third Degree Murder is a strategic advantage in that it gives jurors a fall back for consideration if they cannot agree on 2nd Degree Unintentional Murder, but they believe something more serious than manslaughter is warranted.

"Anything a jury can hang their hat on," said defense attorney Ryan Pacyga.  "The prosecution wants to give this jury a hundred coat hooks."

It could also give prosecutors leverage if a plea bargain is ever back on the table.

As FOX 9 first reported in June, state and federal prosecutors were working on a plea deal with Chauvin in the days after the killing of George Floyd.  Former U.S. Attorney General Richard Barr rejected the deal, the New York Times recently reported.

But ten months later, it is hard to imagine what such a deal would look like.

Pacyga said prosecutors are unlikely to offer manslaughter instead of murder, when "the whole world is watching and we’re sitting on a powder keg."

And for the defense, both 2nd Degree Unintentional Murder and Third Degree Murder carry the same guideline sentence of 10 to 15 years in prison.

"I don’t see how it moves the needle on any plea agreement, I think that ship has sailed," said Gaertner, the former prosecutor.

It is still possible, although unlikely, that Judge Cahill could dismiss the Third Degree Murder charge during the trial or after the verdict, if he decides the evidence presented doesn’t match the statute.

Theoretically, it could happen after the prosecution rests its case, if the defense makes what’s known as a Motion for Judgement of Acquittal.  If that were to occur, the issue could not be appealed.

In extremely rare cases, it can also happen after a jury reaches a verdict, what is known as Judgement Notwithstanding Verdict, or JNOV.  In that case, an appeal would be permitted and would be highly likely.

For Judge Cahill, a former Hennepin County prosecutor, Third Degree Murder remains a legal dilemma:  A statue he has signaled he believes is being misapplied, an Appeals Court ruling he can no longer ignore, and a Minnesota Supreme Court that may be ready to overturn a verdict.

And all of it over a simple word:  Others.