Actor William Shatner, known to many "Star Trek" fans as Captain James T. Kirk, rocketed into space aboard a Blue Origin flight. After exiting the capsule, Shatner struggled to find the words to describe the experience while speaking with Blue Origin founder, Jeff Bezos.

The 90-year-old Hollywood legend became the oldest person ever to travel to space Wednesday when he and three others lifted off from West Texas on board a Blue Origin suborbital spaceflight. As crewmates celebrated the trip by popping champagne bottles all around him, Shatner couldn’t be bothered to join in.

He was too busy waxing poetic about the experience.

"What you have given me is the most profound experience I can imagine," Shatner told Jeff Bezos, no longer able to hold back tears. "It’s an honor. I’m so filled with emotion about what just happened. I just, it’s extraordinary, extraordinary."

Shatner said space travel is something everyone in the world needs to do. Weightlessness was to be expected, but he spoke at length about the dissipation of blue once he left the Earth’s atmosphere.

"The covering of blue — this sheet, this blanket, this comforter of blue that we have on Earth — we say, ‘Oh, our blue sky.’ And you’re looking into blackness, into black, ugliness. And you look down — there’s the blue down there and the black up there and it’s just, there is mother Earth and comfort. And there is — is there death? I don’t know. Is that death? Is that the way death is? And it’s gone. Jesus," Shatner said, burying his face into his hands. 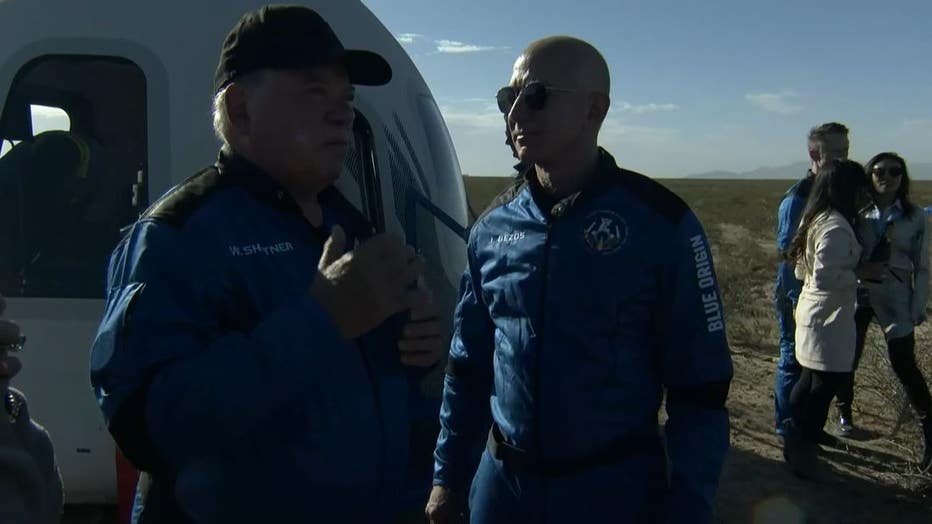 William Shatner, the 90-year-old Hollywood legend, became the oldest person ever to travel to space Wednesday when he, Jeff Bezos and two others lifted off from West Texas on board a Blue Origin suborbital spaceflight. (Source: Blue Origin handout)

Shatner gushed even more about his flight — calling it "so moving" and "unbelievable." He briefly described a feeling in his stomach after launching but he steered back into talking about leaving the blue of Earth’s sky behind.

"This is what I never expected. It’s one thing to say, ‘Oh, the sky and the thing and the gradual,’ it’s all true. But what isn’t true, what is unknown until you do it, is this pillow — there’s this soft blue, the beauty of that color — and it’s so thin! And you’re through it in an instant. It’s, how thick is it," Shatner asked Bezos. "Do we know?  Is it a mile, two miles? "

Shatner, who rose to fame for his portrayal as Captain Kirk in the iconic "Star Trek" franchise, has also written a series of books chronicling his experience in the role. The actor has previously expressed an interest in going to space.

Last week, he said he was terrified of going to space. But after landing back on Earth Wednesday, Shatner was singing a different tune.

"I hope I never recover from this," he said. "I hope that I can maintain what I feel now. I don’t want to lose it. It’s so much larger than me and life."