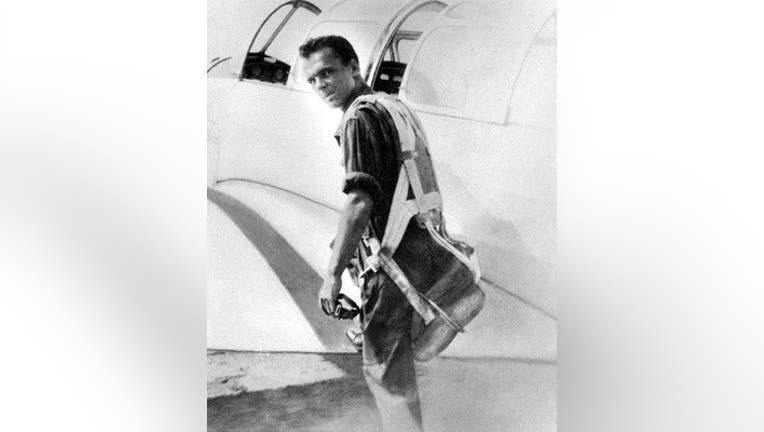 (FOX 9) - Lieutenant William McGowan was flying a plane over northern France on D-Day, June 6,1944, when his plane was shot down and crashed into a field. His remains wouldn’t be found until 75 years later.

“We called him a hero. There’s lots of heroes out there, but we really felt that he was a hero,” McGowan’s niece Nora Slawik said.

A World War II veteran from Minnesota will be laid to rest, as his remains were finally identified 75 years after he died in combat.

Slawik only knew her Uncle Bill in stories. He was her mother’s brother who she knew likely died when he was 23 years old while fighting in World War II.

“They know that he crashed into a farm field. They found the dog tags, but they had not found the remains,” Slawik said.

On D-Day, Lt. McGowan was flying a Thunderbolt while on a mission near the city of Saint-Lo, France. Slawik says his orders were to take out bridges German soldiers were using to get better access to Normandy Beach, where Allied troops were arriving on shore.

Lt. McGowan’s plane was shot down. He crashed in a field just outside of the village of Moon-sur-Elle, a place Slawik’s mother would visit shortly after the war ended.

“My mom, in 1948, actually had a bicycle and rode out to the site, and there was the tail from the plane in the field. The farmers told her about how the plane went down and burned for 24 hours,” Slawik said. “The people in France were truly grateful. They felt that he had gone down in the field to avoid destroying the city.”

Lt. McGowan’s remains were never found. A plaque is displayed near the crash site honoring the soldier for his sacrifice, but his family back in Minnesota never really had closure.

“It was surreal because all of those years my mom and my aunt and my grandparents had wondered what happened to him," Slawik said.

For years the family tried to find his remains to give him a proper burial. Slawik says despite finding his dog tags at the crash site, the military had considered him “Missing In Action.” In 2018 the family received a call that the land where McGowan’s plane had crashed was up for sale and a team from the St. Mary’s University Forensic Aviation Archaeological Field School in Halifax, Nova Scotia was sent in to excavate the site.

The team was able to find some teeth. The teeth provided enough material to conduct a DNA match with McGowan’s surviving relatives, including Slawik.

About a year ago, DNA testing results proved what Slawik’s family had suspected for 75 years: the remains found in the field near the crash site, found seven decades after the plane was shot down, were those of Lt. William McGowan of Benson, Minnesota.

On this Memorial Day, Slawik says her family is finally able to honor the sacrifice their uncle made so many years ago. She says the whole process has brought her family closer together, meaning her uncle’s reach is spanning generations.

“I think it’s the continuation of the world’s greatest generation and being able to continue and keep that story alive,” Slawik said.

Lt. McGowan has been awarded a Purple Heart for his sacrifice. Slawik and her family had plans to bury McGowan at the Normandy American Cemetary in France this June on what would have been McGowan’s 100th birthday. Due to coronavirus concerns, the family has postponed the burial to next summer.