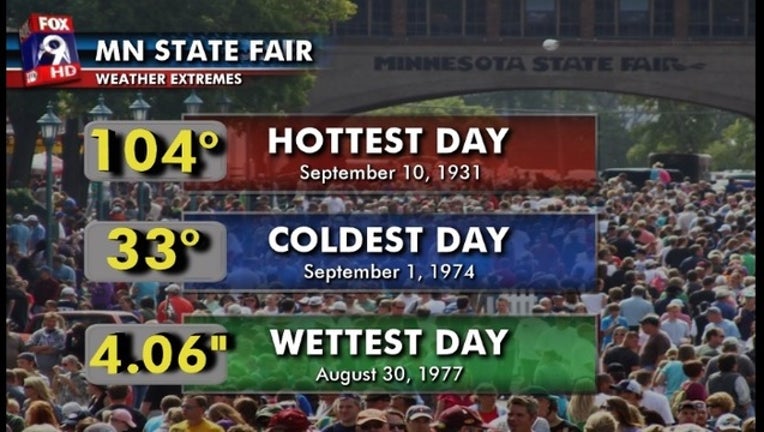 The Great Minnesota Get-together, in a way, is the unofficial end to summer in Minnesota. The 12 day showcase of everything Minnesota ends on Labor Day and once it’s gone, it’s back to school and back to reality for a lot of Minnesotans.  The State Fair sticks in the memories for a lot of us because we can all remember the weather conditions during our favorite days. Fair weather is usually fair but it also runs the gamut of everything from the last breath of summer to the first chill of fall.  Check out the weather extremes from the 130 year history of the Minnesota State Fair.

THE HOTTEST DAY:  104°
The fair was only 8 days back in 1931 but that was just long enough to break the all-time temperature record with a high temperature of 104° on September 10th.

THE HOTTEST STATE FAIR RUN:  2013
This was definitely The Great Minnesota Sweat Together when the longest stretch of 90 degree days, 6 out of 12, took the average temperature for the run of the fair to 88.2°.

THE WETTEST DAY:  4.06”
Do you remember where you were exactly two weeks after the day Elvis died? August 30, 1977 started off dry but at 8:20 pm the skies opened up and dropped 4.06 inches of rain resulting in some the wettest day and worse street flooding ever at the fair. By the end of its run, the 1977 MN State Fair went down in the record books as the wettest in history with 9.48” of total rainfall.

THE NICEST WEATHER:  2003
You don’t have to think back too far to remember the state fair with the tamest weather. In 2003 the Great Minnesota Get Together only recorded .08” if rainfall. This was definitely a year when the weather was not an obstacle.

MINNESOTA STATE FAIR WEATHER HISTORY THIS CENTURY
You are almost guaranteed any type of weather if you go back more than a hundred years and that is definitely the case for the Minnesota State Fair. However, I just it would be fun to re-cap the state fair weather seen in our recent memory. Below are the Minnesota state Fair weather extremes since the turn of the century back in 2000.

THE MINNESOTA STATE FAIR SINCE 2000

On average the State fair will get rained on 3 to 4 times during its 12 day run. The average temperatures will see the mercury hover in the upper 70s for highs and the upper 50s and low 60s for overnight lows.

LAST YEAR AT THE FAIR
We all like to compare the forecast to what happened last year. 2014 was a tranquil year at the fair with not too many extremes in weather. The warmest day was 89° on August 31 and the coolest daytime high was 72° on August 28. The chilliest morning was a not so bad 65° on the last day of the fair, September 1, 2014. The wettest day was on August 29th with .68” of rain, and there was measurable precipitation, 1/10th of an inch or more, on 7 of the 12 days from August 21 – September 1.