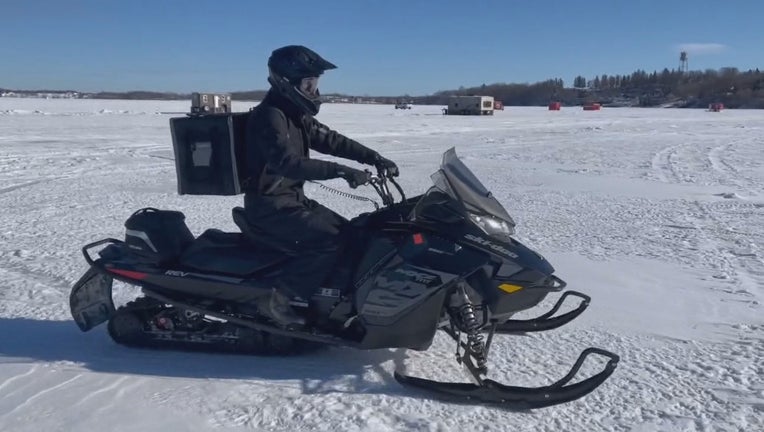 Iron Tap in Waconia, Minnesota is offering snowmobile delivery on Lake Waconia to ice houses amid the pandemic. (FOX 9)

WACONIA, Minn. (FOX 9) - Thanks to some pandemic creativity, a restaurant in Waconia, Minnesota is now trying something uniquely Minnesotan: delivering food and beer via snowmobile across frozen Lake Waconia.

Greg James is the owner of Iron Tap, which is two blocks from the lake. When brainstorming how to boost business during COVID-19 restrictions, he realized there were 1,500 ice houses full of potential customers.

Thanks to some pandemic creativity, a restaurant in Waconia, Minnesota is now trying something uniquely Minnesotan: delivering food and beer via snowmobile across frozen Lake Waconia.

"I haven’t [heard of anyone else doing this] and there’s probably a reason," said James. "It was kind of stressful for me for a couple months to figure out the logistics of the whole thing."

The first issue was finding the ice house. They’ve discovered you can share your location via your phone, and so far, it has worked every time.

"If you’re out there and there’s houses, we’re likely going to get to you," said James.

The second issue was finding electrically heated backpacks, which took a while, but it all works.

The other key was finding 19-year-old Jake Foley, who grew up on this lake and knows it well.

Without COVID-19 they would have never thought to try this.

"But it’s what you got to do to stay alive, evolve, adapt and just get through this mess," said James.

Like so many other forced innovations during the pandemic, this is something that may stick around.

"I think it’s going to be a great success. We’re only on day two tomorrow, but I think it’s something we’ll do," said James.