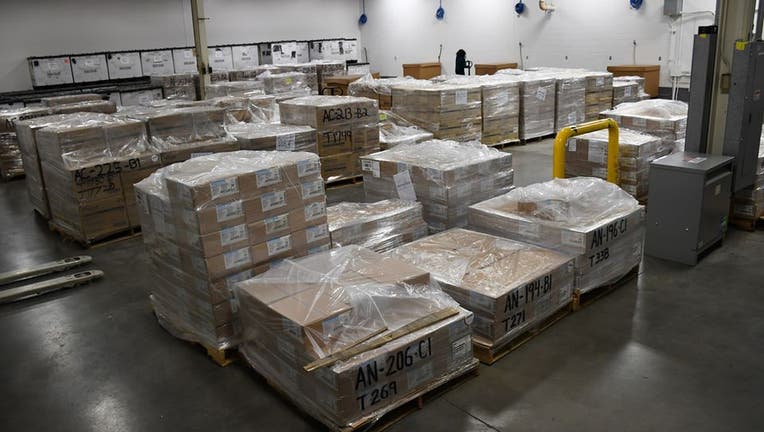 ST. PAUL, Minn. (FOX 9) - Over the weekend Governor Tim Walz authorized the Minnesota National Guard and gave them their first assignment. Here’s what the guard’s Joint Chief of Staff says the guard will and won’t be doing to help during the Coronavirus pandemic.

On Saturday and Sunday Minnesota National Guard members helped bring around 81,000 N95 medical grade masks from their warehouse at Camp Ripley to a warehouse in St. Paul where the masks will be distributed to health care workers.

Over the weekend Governor Tim Walz authorized the Minnesota National Guard and gave them their first assignment.

“They were federal supplies we’ve had at Camp Ripley for a number of years and we’ve transferred them to state ownership and then we transferred them then to a state warehouse and now the state of Minnesota can further distribute,” Minnesota National Guard Joint Chief of Staff Colonel Simon Schaefer said.

Colonel Schaefer says most of the National Guard’s role in COVID-19 response has been logistical. He says their orders from the governor, as of now, is to help transport supplies around the state, be a part of their emergency operations planning and support any state agencies who might need their help.

He says they’ve only had to activate a few guard members for these missions but says all 14,000 members have been notified that they may be utilized. He says not all members would be utilized at once and if their civilian job is more important in fighting COVID-19 they will likely not have to fulfill National Guard duties.

How you can help Minnesota nurses and first responders

As supply becomes short, health care leaders are searching for protective equipment donations, like masks, from members of the public.

Colonel Schaefer says as of now, and likely in the future, this will not mean the National Guard acts as law enforcement or first responders. He says that’s not their role.

He says it could mean members of the National Guard step in to help overworked medical staff.

“We do have specific medical units within the national guard between the army and the air. Depending on the mission approved through the governor’s office those units could be utilized in that specific role,” Colonel Schaefer said.

Last week President Trump authorized 502f funding in a title 32 status for Washington state, New York state and California. That means operations by those states’ National Guards will be paid for by the federal government, instead of states footing the initial bill and filing for a refund. Colonel Schaefer says that gives states new options on how to utilize the National Guard.

Nurses spoke out Wednesday, concerned about a potential shortage of protective gear and other issues related to caring for ill patients.

“We are watching the other states carefully just to be informed about how they’re being employed by their governor but each national guard is employed superficially by their governor so that’s where we stay tied closely with the governor’s cabinet to make sure we’re communicating how the Minnesota guard can contribute,” Colonel Schaefer said.