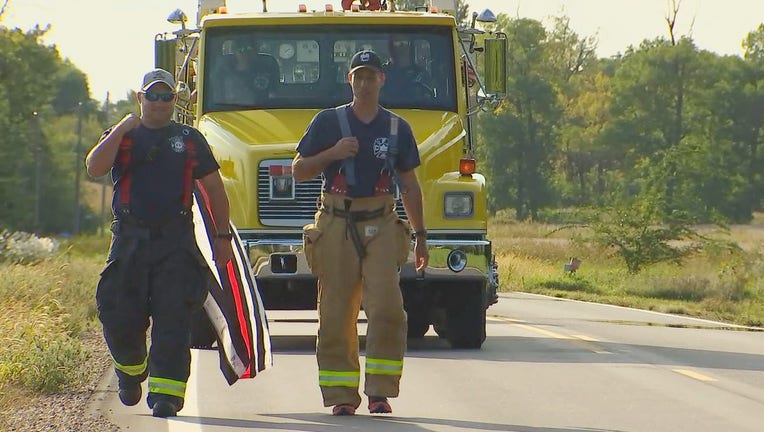 HUTCHINSON, Minn. (FOX 9) - Fighting fires often takes a lot of strength and stamina. A firefighter from the south metro is putting those qualities to the test to help his fellow firefighters.

"I would definitely say it’s the most challenging, physical thing I have done so far," said Chanhassen firefighter Doug Foote.

Fighting fires often takes a lot of strength and stamina. A firefighter from the south metro is putting those qualities to the test to help his fellow firefighters.

Foote is used to strenuous physical activity, but step-by-step he is seeing all his state has to offer -- on foot.

"It's just been so inspiring," said Foote. "The outpouring from the public, my brothers and sisters from fire departments along the way."

Wearing his firefighter gear, Foote is walking 200 miles across Minnesota to raise awareness about firefighter health in an effort called Miles for MnFire. The Minnesota Firefighter Initiative helps firefighters protect themselves from cancer, cardiac arrest, and suicide that are killing them at higher rates than the general public.

"Time is ticking on your life and if you don't take care of some of this stuff you are going to be taken out," he said.

Foote started his journey in Marietta on the western edge of Minnesota on Sunday morning, stopping at fire stations in small towns along the way. He's averaging about 30 miles a day and is often accompanied by fellow firefighters and their families. He plans to reach his final destination, the Minnesota State Capitol in St. Paul, on Saturday.

Foote has also raised nearly $10,000 for MnFire as well. When it comes to higher firefighter mortality, he hopes his walk is a step in the right direction.

"I love Minnesota," said Foote. "What better way to do something than by walking across the greatest state in the union."