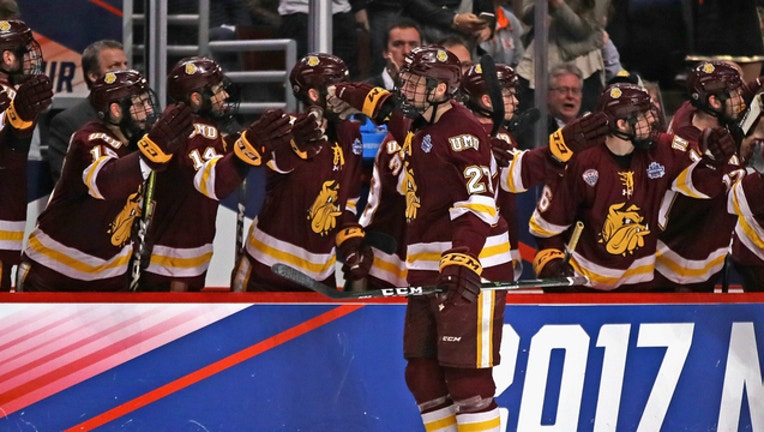 (AP) - Louie Roehl and Jared Thomas scored in the first 3:04 and Minnesota Duluth held off Ohio State 2-1 on Thursday night to reach the NCAA championship game for the second straight year.

Hunter Shepard made 19 saves for the Bulldogs (24-16-3), allowing only Tanner Laczynski's power-play goal in the third period. Sean Romeo stopped shots for the Buckeyes (26-10-5).

The Bulldogs will face Michigan or Notre Dame on Saturday night. Duluth lost 3-2 to Denver in the title game last season in Chicago.

The Bulldogs needed less than two minutes to ignite the heavily partisan crowd, with freshman defenseman Roehl scoring his third career goal after a cross-ice pass from Matt Anderson. Roehl is one of five freshmen playing defense for the Bulldogs.

Just 1:11 seconds later, they made it 2-0 when Thomas got behind the defense and scored on a breakaway. The Bulldogs outshot Ohio State 17-4 in the opening period.

The Buckeyes rebounded for an 8-6 shot advantage in the second, but could not solve Shepard until midway through the third. On Ohio State's second consecutive power play, Laczynski's wrist shot hit Thomas' left hand and changed directions in front of Shepard.

Duluth's lone NCAA title came in 2011 when the Bulldogs beat Michigan 3-2 in overtime, the last time the Frozen Four was played at Xcel Energy Center. This will be their fourth title-game appearance in six trips to the Frozen Four.