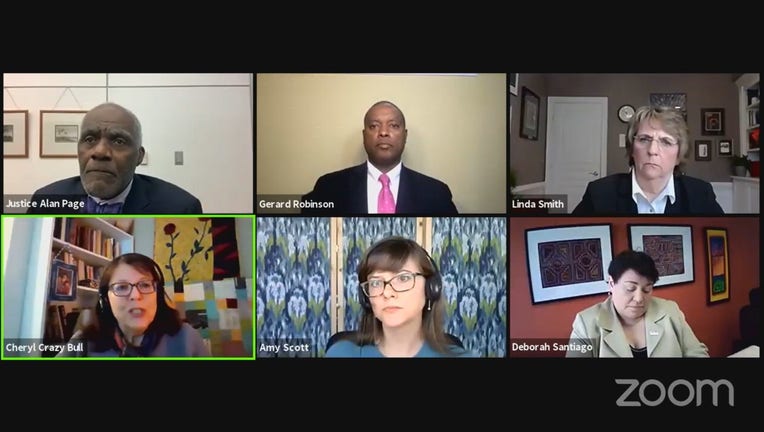 Racism and the economy was the topic of conversation among some prominent Minnesota officials and some Federal Reserve Presidents Tuesday.

MINNEAPOLIS (FOX 9) - "Racism and the economy" was the topic of conversation Tuesday led by officials with the federal reserve.

Racism and the economy were the topics of conversation Tuesday led by officials with the federal reserve.

"We would love to end racism and start there," said Neel Kashkari, the president of the Federal Reserve Bank of Minneapolis. "How do we make progress when we still don’t see ourselves in one another."

In an open conversation, leaders of the Federal Reserve System and beyond weighed in on an ongoing discussion about racism and the economy.

"Education is critically important to improving economic outcomes for all Americans," said Robert Kaplan, president of the Federal Reserve Bank of Dallas.

The group, comprised of researchers, policymakers and community leaders envisioned a better future for indigenous children and children of color.

"If we’re going to address the achievement disparities, we have to make sure that we’re seeing that every adult in our schools actually believes that every student has equal and intrinsic worth and we don’t see that.

"If we are to break out of the cycle that we’re in, the system has to change," said retired Minnesota Supreme Court Justice Alan Page.

Page is part of a campaign to make public education a civil right.

"I think that by making education a civil right, giving children the opportunity to reach their higher selves we can bring about change," said Page.

From systemic racism in housing to criminal justice, it’s one of several proposals aimed at helping improve the economic outcomes for all.

Today’s discussion was part three in a seven-part series on racism and the economy. Justice Page has been working with the President of the Minneapolis Federal Reserve Bank for more than a year to eliminate academic disparities in the state’s public education system.