Michael Haub, 34, from Ladder Co. 4 in midtown Manhattan was killed in the Sept. 11, 2001 attack and left behind a wife and two young children.

FRANKLIN SQUARE, N.Y. - A firefighter from Long Island who died in the World Trade Center attacks was remembered for a second time on the eve of the 18th anniversary of 9/11.

RELATED: ‘Tomorrow that number could rise': 241 NYPD officers have died from 9/11-related illnesses

The 34-year-old Haub from Ladder Co. 4 in midtown Manhattan was on the job for just two years when he was killed in the Sept. 11, 2001 attack. He previously served as the chief of the Roslyn Heights Highlands Fire Department and was a 13-year veteran of the department, according to the New York Daily News.

Haub was married and left behind two young children. 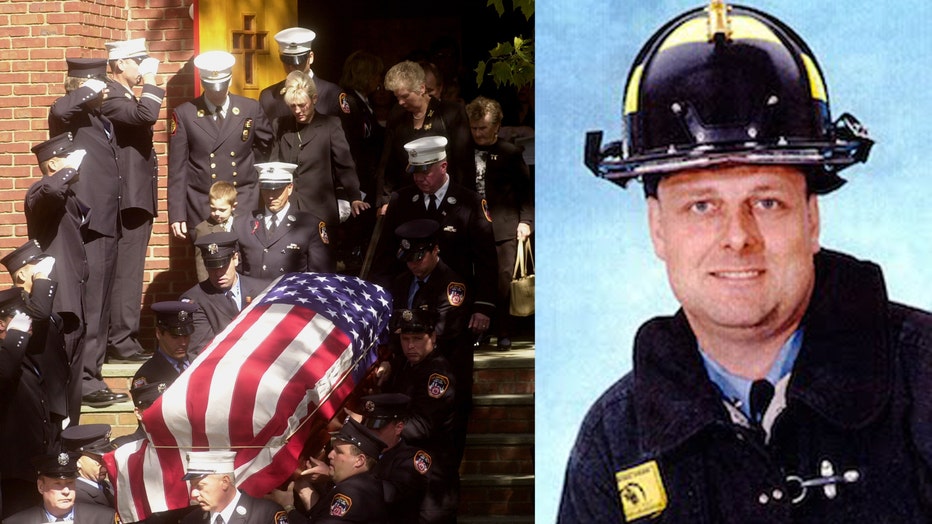 Erika Haub is pictured at a 2002 memorial service held for her husband, Firefighter Michael Haub of Ladder 4, in a file photo, alongside a family handout image of Haub. (Photo credit: Willie Anderson/NY Daily News Archive via Getty Images)

Haub's remains were initially found in lobby debris of the south tower six months after hijacked planes rammed into the two skyscrapers. His family held a March 2002 wake that was attended by then Mayor Michael Bloomberg and FDNY Commissioner Nicholas Scoppetta.

RELATED: Never forget: A timeline of the events of September 11, 2001

"Nearly eighteen years to the day after terrorists took his life, Firefighter Haub will be remembered by his loved ones and fellow firefighters," Fitzgerald said in a statement Tuesday.