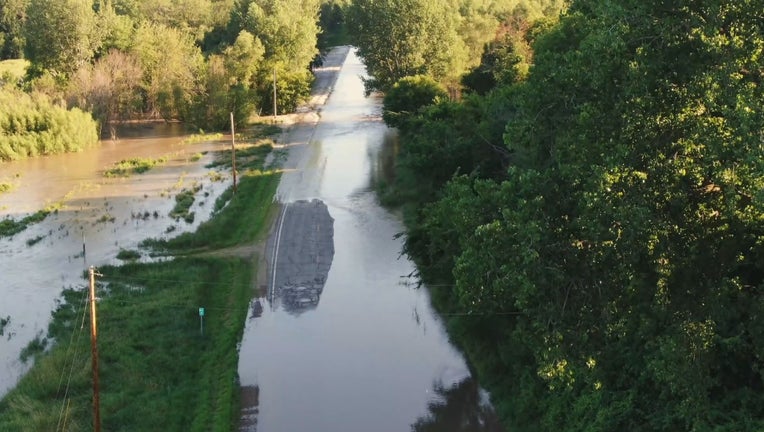 HENDERSON, Minn. (FOX 9) - Heavy rain this weekend in southwestern Minnesota left residents in Henderson, Minnesota a reminder that lawmakers did not pass flood mitigation funding during the latest special session.

The Minnesota Department of Natural Resources State Climatology Office officially classified the torrential rain this weekend as a mega-rain event – the first in Minnesota since 2016. This means the storm produced at least six-inch rainfall amounts spread out over a thousand square miles.

Henderson, Minnesota flooded again after a Megan rain event over the weekend. Leaders there want a more long-term solution to the annual problem.

During the rain event Saturday night, Sibley County got 10.6 inches. For the City of Henderson, that meant flooding along Highway 93.

“This is not new,” said Henderson Mayor Paul Menne. “What we’ve noticed over a period of time now is that flooding has actually increased in both intensity – flow and frequency.”

“93 has a lot of damage every time that the flood waters go over it,” he said.

The highway is a major thoroughfare in the area. When flooded it cuts Henderson off from the nearest hospital and where kids go to school. He says there are plans in the works to raise the highway up above the 100-year flood level, but that plan is part of the nearly $2 billion bonding bill lawmakers failed to pass last week.

“When the bonding bill failed I would say a lot of people were disappointed and frustrated,” said Menne. “We’re going to keep fighting. Just because it failed doesn’t mean we’re going to stop.”

As of Monday night, a portion of Highway 93 remained closed to traffic.