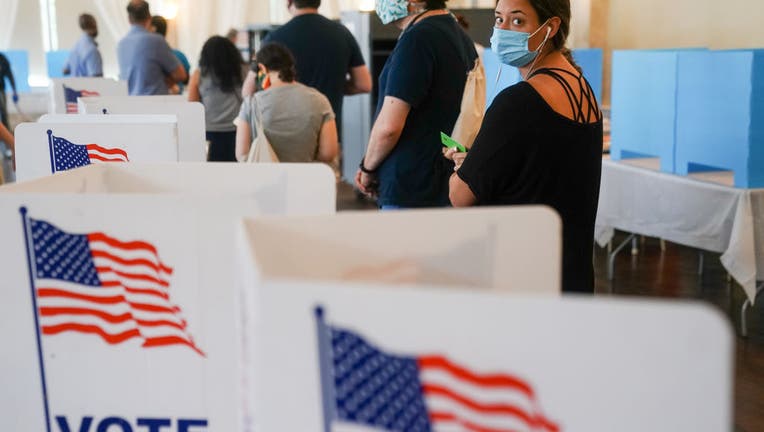 People wait in line to vote in Georgia's Primary Election on June 9, 2020 in Atlanta, Georgia. (Photo by Elijah Nouvelage/Getty Images)

Many Americans remain pessimistic about the state of U.S. democracy and the way elected officials are chosen -- nearly two years after a divisive presidential election spurred false claims of widespread fraud and a violent attack on the U.S. Capitol.

Only about half of Americans have high confidence that votes in the upcoming midterm elections will be counted accurately, according to a new poll by The Associated Press-NORC Center for Public Affairs Research, though that’s an improvement from about 4 in 10 saying that just before the 2020 presidential election. Just 9% of U.S. adults think democracy is working "extremely" or "very well," while 52% say it’s not working well.

Ronald McGraw Sr., 67, of Indianapolis, is a retired construction worker who recently registered to vote and intends to cast a ballot for the first time this year.

"I thought I’d let everybody else put their vote in and just go with the flow, but this whole thing is at stake now," he said, referring to democracy, the economy, "everything, how the whole country runs."

McGraw, who is Black and considers himself a moderate, said a big concern is the political turmoil in the country and the fact that he sees too many self-serving politicians concerned with power, especially those who work against the interest of minorities. He said he registered as a Republican but did not give any thought to party platforms or stances at the time.

"I am paying attention now," he said.

After every presidential election, members of the losing candidate’s party can experience a letdown. The fallout from the 2020 election has been deeper, fueled by the lies from former President Donald Trump and his allies that Democrats stole the election.

There is no evidence of widespread fraud or manipulation of voting machines. Exhaustive reviews in key states upheld Democrat Joe Biden’s win, while judges — including some appointed by Trump — dismissed numerous lawsuits challenging the outcome. Trump’s own attorney general, William Barr, called the claims bogus.

The general despair over democracy comes after decades of increasing polarization nationwide, from the presidential and congressional races down to local contests such as races for school boards.

Overall, just a quarter of U.S. adults — including similar percentages of Republicans and Democrats — say they are optimistic about the way leaders are chosen, while 43% say they are pessimistic. An additional 31% feel neither.

Gary Phelps, a 70-year-old retired truck driver in Clearwater, Minnesota, accepts Biden is president but doesn’t think he was legitimately elected. Phelps said he was concerned about voter fraud, mail ballots being received and counted after Election Day, and irregularities with some voting machines, although he acknowledged it’s based on his feeling rather than evidence.

Phelps remains concerned about the voting process and whether the tallies will be accurate. "I would hope so, but I don’t think so," the Republican-leaning independent said.

The poll shows 47% of Americans say they have "a great deal" or "quite a bit" of confidence that the votes in the 2022 midterm elections will be counted accurately. Confidence is highest among Democrats, 74% of whom say they're highly confident. On the Republican side, confidence in elections is decidedly mixed: 25% have high confidence, 30% have moderate confidence and 45% have little to no confidence.

That erosion of trust comes after two years of Trump and his allies promoting lies about the 2020 presidential election and peddling conspiracy theories about voting machines.

Narratives about mailed ballots mysteriously changing vote totals have been one persistent source of misinformation. To be clear, results announced on election night are unofficial and often incomplete. It’s normal for counting to continue several days after Election Day, as mailed ballots received by their deadline are processed and added to the tally.

Elections are stressful. Here are some expert tips to help you cope

Tania Israel, professor of counseling psychology at U.C. Santa Barbara and author of"Beyond Your Bubble: How to Connect Across the Political Divide, Skills and Strategies for Conversations That Work," gives tips to help people cope with stress and anxiety during elections.

In 2020, the COVID-19 pandemic led to a surge of mailed balloting as voters opted to avoid crowded polling stations. A large number of those ballots slowed down the results as local election offices worked through the steps to verify the ballots and ensure they matched registered voters.

Julie Duggan, a 31-year-old police officer from Chicago, is among the Republicans who does not believe Biden’s win was legitimate. She said watching his gaffes and missteps, it was impossible to believe he garnered enough support to win.

She is concerned about the country’s direction, citing inflation, illegal immigration, crime rates and a lack of respect for law enforcement.

"If we don’t get the right people in, we will be at the point of no return," she said, adding she hopes elections will be run fairly but has her doubts. "My confidence has definitely been shaken."

The poll of 1,121 adults was conducted Oct. 6-10 using a sample drawn from NORC’s probability-based AmeriSpeak Panel, which is designed to be representative of the U.S. population. The margin of sampling error for all respondents is plus or minus 3.8 percentage points.