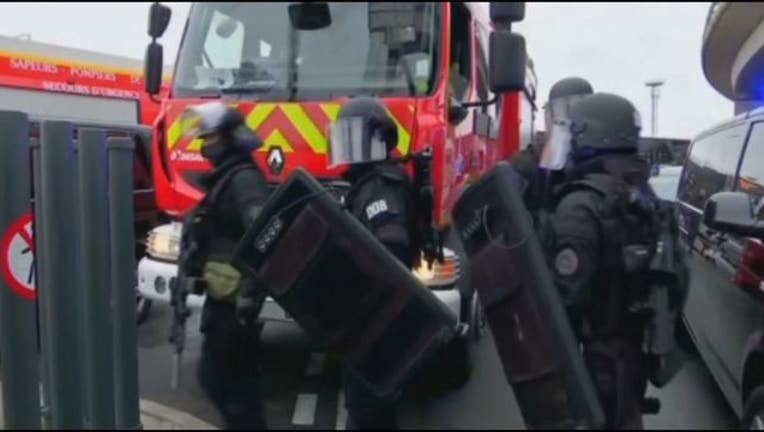 The official spoke to The Associated Press on condition of anonymity because they weren't authorized to publicly discuss the suspected attacker's identity.

France Info radio, on its website, identified him as Ziyed Ben Belgacem, which the official confirmed to the AP. Le Parisien newspaper named him only as Ziyed B. and said he was born in Paris.

The Paris prosecutors' office says the 39-year-old suspected attacker who was shot and killed at Orly Airport had already crossed authorities' radar for suspected Islamic extremism.

Prosecutors say Saturday that the suspect's house was among scores searched in November 2015 in the immediate aftermath of suicide bomb-and-gun attacks that killed 130 people in Paris. Those searches targeted people with suspected radical leanings.

After the airport attack on Saturday, the suspect's father and brother were detained by police for questioning -- part of standard police operations in such cases.

French President Francois Hollande says investigators will determine whether the Orly Airport attacker "had a terrorist plot behind him."

Hollande ruled out any link between Saturday's attack and the upcoming French presidential election in April and May, noting that France has been battling the threat of extremism for several years.

He says the attack shows that France's policy of having military patrols guarding public sites "is essential," and that the nation "must remain extremely vigilant."

Flights are gradually resuming from Paris' Orly Airport, in the wake of Saturday's attack by a man who was killed as he tried to take a soldier's weapon.

The Paris airport authority, ADP, says the first flight from the reopened airport's West Terminal was bound for Pau in the French southwest at 1:34 p.m. (1234 GMT), five hours after soldiers shot and killed the attacker.

Flights are yet to resume at the airport's South Terminal.

French police say the suspected attacker killed at Orly Airport was stopped earlier Saturday morning by a police patrol in northern Paris because he was driving too fast.

The national police information office says that as the man was showing the traffic patrol his ID papers, he pulled out a gun and fired bird shot at the three officers, injuring one of them.

Police fired back. The man fled in his car.

That traffic stop at 6:50 a.m. was at Garges-les-Gonesse, north of Paris near Le Bourget airport.

The man later abandoned that vehicle at Vitry, south of Paris, and stole another. That car was later found at Orly airport.

French president Francois Hollande has praised the courage and efficiency of troops and police following the incidents at Orly Airport and in a northern Paris suburb.

In a written statement, Hollande reaffirms the state's "determination to act without respite to fight terrorism, defend our compatriots' security and ensure the protection of the territory."

He says the Sentinelle operation --about 7,500 troops patrolling on the country's streets and sensitive sites-- has proved useful in addition to police forces.

The Paris prosecutors office says the suspected attacker killed at Orly Airport after trying to wrestle away a soldier's weapon was 39 years old and was known to police for robbery and drug offenses. Prosecutors did not disclose the man's name but said he was born in 1978 and nine unspecified infractions on his criminal record.

A spokesman for the military force that patrols public sites in France says the soldier attacked at Orly Airport was "shocked" but uninjured after the "very violent aggression" by a man who was quickly shot dead by two of her fellow patrolmen.

The spokesman, Benoit Brulon, was speaking to BFM television.

The attack at Orly Airport marked at least the fourth time that Sentinelle soldiers have been targeted since the force was created two years ago. Some have been wounded, but no one in the force has been killed.

The Sentinelle force was set up after the attack on satirical magazine Charlie Hebdo on January 7, 2015. Reinforced after the Nov. 13 assaults that left 130 people dead in Paris, it includes 7,500 soldiers, half of them deployed in the Paris region and half in the provinces.

In February, a man wielding a machete attacked four Sentinelle soldiers near the Louvre Museum, a year after three patrolmen were wounded by a man armed with a knife outside a Jewish community center in the southern city of Nice.

In January 2016, a man rammed his car into four soldiers guarding a mosque in the southeastern city of Valence.

The Paris prosecutors office, which has taken over the investigation of the Orly Airport attack, says the suspected attacker who was shot dead was not listed on the government's database of terrorist suspects.

France maintains a database, known as the "S" list, of people considered a potential threat to national security, which includes people suspected of plotting terrorist acts.

The prosecutors' office says the man shot at Orly Airport was not in the database.

The head of the Paris airports company says searches of Orly Airport are complete and passengers who had been blocked aboard 13 flights are being unloaded.

Passengers aboard flights that landed at Orly as the drama was unfolding were prevented from immediately disembarking. But Augustin de Romanet, president of the ADP airport authority, says they are now being allowed off the flights.

He told BFM television that 15 other flights were diverted to Paris' other main airport, Charles de Gaulle, because of the attack.

French authorities have established a rudimentary timeline for the attack on Saturday at Orly Airport:

--6:50 a.m.: The suspected attacker fires birdshot at police officers, wounding one in the face, when stopped for a traffic check. Flees, using a weapon to threaten a motorist and steal her car, later found at Orly Airport.

--8:30 a.m.: Attacker assaults patrol of three soldiers, all from French air force. Wrestles one soldier, a woman, to the ground, tries to take her weapon.

The investigation into the attack on soldiers guarding Paris' Orly Airport, as well as a shooting 90 minutes earlier that targeted police north of Paris, has been taken over by anti-terrorism investigators.

The Paris prosecutors' office confirms that its anti-terrorism section has taken over the investigation.

The French defense minister, Jean-Yves Le Drian, says the Orly Airport attacker assaulted a patrol of three soldiers, all from the air force, including a woman.

He says the attacker wrestled the woman to the floor and tried to take her weapon, but she managed to keep hold of it.

The minister says the two other patrolmen opened fire "to protect her" and the public in the airport.

French Interior Minister Bruno Le Roux says the man shot dead at airport is the same as the one who "is linked with car hijacking" earlier in the morning in a Paris suburb.

Le Roux says the man who was not identified, earlier shot a police officer at a traffic stop before stealing the woman's car at gunpoint. Le Roux said the gunman was known by police and intelligence

French presidential hopeful Emmanuel Macron has paid tribute to the French troops securing streets and sensitive sites in the country after a string of deadly Islamic extremist attacks.

Macron, an independent centrist, said in a speech on defense in Paris that the soldiers of the Sentinelle operation who were attacked in Orly Airport "have demonstrated one more time calm, control and professionalism."

France's Interior Ministry says no one else was injured at Paris' Orly Airport when a man was shot to death after seizing a soldier's weapon.

The ministry tweeted that "the events this morning at the airport caused no injuries."

Explosives experts have finished checking the site, according to a tweet from the regional administration.

The interior minister and defense minister are en route to Orly, according to the national police.

Thousands of people are being evacuated and flights are being redirected.

Paris police are investigating whether an attack on a soldier at Orly Airport is linked to a shooting earlier Saturday north of Paris.

The Paris police office says a man fired at police officers with a gun that fired birdshot, wounding one in the face, when stopped for a police traffic check early Saturday morning.

The man then fled, threatening a motorist with a weapon to steal her car.

Police say that car was later found close to the Orly Airport.

The traffic stop was at 6:55 a.m., shortly before the attack at Orly.