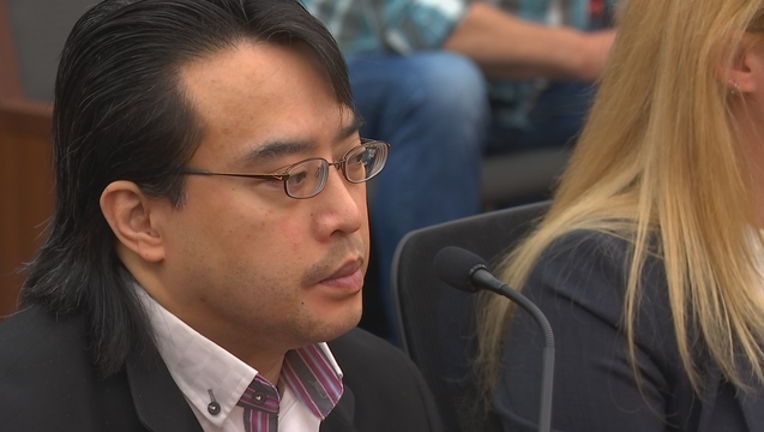 According to the criminal complaint, on July 29, 2017, Nguyen robbed a woman at gunpoint in her home, led police on a brief car chase before running into a senior care facility. Inside, he forced an employee at gunpoint into a laundry room and took her keys. While police responded to the scene, Nguyen slipped away from the senior home to a nearby office building, where he murdered Cory and got away in her car.

“I still do not smoke, I still have my husband and I still work at Edward Jones, but I don’t have her anymore," said Kim Elliot, Cory's best friend. "Just below the surface is a grief I’ve never felt before and anger that is not normal for me and sadness that is woven into everything that I do.”

“She embodied what is good and benevolent, respectful and trustworthy, whimsical, funny, dedicated and hard-working, brilliant and accomplished and devoted and loving - the kind of woman I was so proud to introduce as my daughter,” said Judy Osland, Cory's mother-in-law.

The homeowner who was robbed at gunpoint, Nancy Joyce, says since the incident she has been through counseling and greatly upgraded her home security system.

“When Mr. Nguyen entered my home uninvited, threatening my granddaughter and me with a handgun, my sense of security and safety I felt within my home and the trust that I had in others were stripped away," said Osland. Mr. Nguyen has dramatically altered the way I live."

Nguyen did not speak at the sentencing.

"We seldom see random crimes of extreme violence of this nature," said Dakota County Attorney James Backstrom in a statement. "These senseless acts of violence have devastated the family and friends of Beverly Cory and significantly traumatized the other victims. We are pleased to have brought the defendant to justice. He clearly deserves the lengthy prison sentence he has received."

Nguyen is expected to serve a minimum of 30 years in prison.