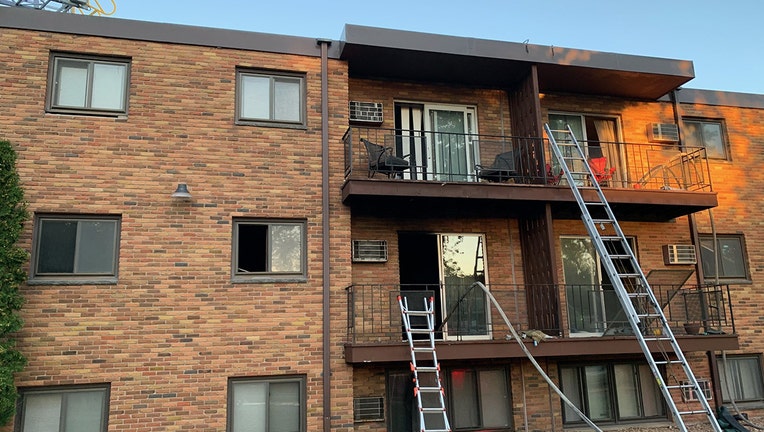 Nineteen residents are displaced after a fire at a three-story apartment on the 1600 block of Marion Street.  (St. Paul Fire Department / FOX 9)

ST. PAUL, Minn. (FOX 9) - A man has been charged with arson for allegedly starting a fire at a St. Paul apartment building Tuesday that displaced 19 residents.

Matthew Gieske, 38, of St. Paul was charged Thursday with one count of first-degree arson for his role in the fire at the apartment building on the 1600 block of Marion Street.

According to the charges, Gieske, who lives in the building, approached another resident and his sister with a knife as they were walking out to a car on Tuesday night. Gieske fled after the resident threatened him with a gun.

The resident returned to his apartment on the second floor. A short time later, he heard someone playing with his doorknob and smelled something similar to lighter fluid. He looked through the peephole and saw it was Gieske, who had a history of knocking on doors and trying doorknobs in the building. He told Gieske to go away.

Police were called to the scene. Officers recovered a partially melted gas can in the second-floor hallway.

Officers located Gieske, who appeared to be a "person in crisis." He did not follow police directives and was eventually taken into custody. He has prior convictions for terroristic threats and being a felon in possession of a firearm.

The three-story building was severely damaged by fire and eventually condemned, according to the St. Paul police department. Nineteen residents were displaced.