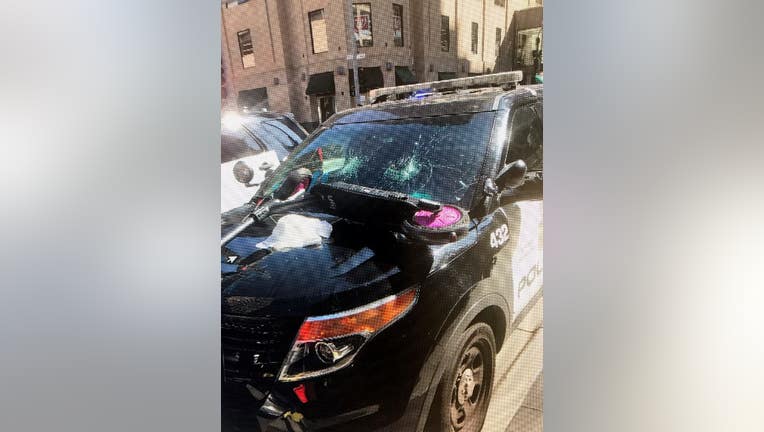 A Minneapolis police squad car was damaged Monday when a man threw an electric scooter at it. (Minneapolis Police Department / FOX 9 Minneapolis-St. Paul)

MINNEAPOLIS (FOX 9) - Minneapolis police arrested a man downtown Monday after he allegedly damaged two squad cars, including throwing an electric scooter through the windshield of one of them.

The first incident was reported at 9:38 a.m. Police said they were notified of a man attempting to damage a marked squad car parked on 3rd Avenue outside Minneapolis City Hall.

When officers arrived, they found the side mirror had been damaged and there was a white t-shirt on the car, but the suspect was gone.

The second incident was reported at 11:23 a.m. The 911 caller said he was watching a man throw an electric scooter through the windshield of a parked, unoccupied squad car near the intersection of 7th Street and Nicollet Avenue. The suspect then reportedly poured a liquid onto the squad car and left a white t-shirt on it before fleeing on foot.

Witnesses followed the suspect and updated 911 dispatch with his location. Officers eventually caught up with the suspect and arrested him. He has been booked into the Hennepin County Jail for probable cause damage to property.